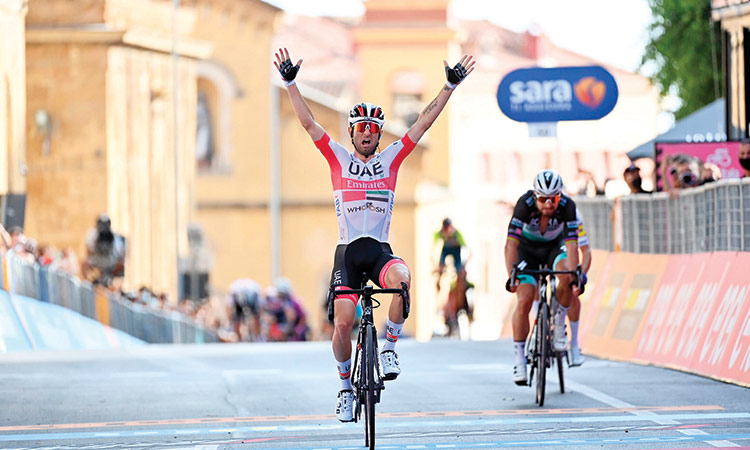 UAE Team Emirates’ Diego Ulissi celebrates as he crosses the finish line to win the second stage of the 2020 Giro d’Italia on Sunday. Agence France-Presse

Agrigento: Italian Diego Ulissi of the UAE team won an uphill dash for the line on stage 2 of the Giro d’Italia on Sunday as compatriot Filippo Ganna kept the overall leader’s pink jersey.

The victory was Ulissi’s seventh on the Giro and follows Ganna’s home crowd pleasing win on Saturday.

Race favourite, Ineos captain Geraint Thomas, and the main contenders for the three-week event all finished together on the Sicilian hilltop.

On a sizzling afternoon the peloton left Alcame to run through the Valley of the Temples with their Minoan archaeological ruins, but the southern coast chalk cliffs and rolling breakers out at sea provided an equally attractive backdrop.

Thomas’ Ineos kept tabs on an escape group all afternoon and rolled them in at the bottom of a sharp 4km climb. Simon Yates said Sunday’s stage two was the start of the real Giro after Saturday’s windy individual time trial and his team set the pace on the hill.

Peter Sagan looked set for a surprise win but Ulissi’s late acceleration with 100m to go sealed the day. Sicily stepped in to host the first four days of the Giro after original hosts Budapest pulled out when the coronavirus crisis exploded in March.

Monday’s third stage is a 150km run through the dead centre of Sicily to a summit finish on the Island’s main volcano Mount Etna, with the final 4km through lava fields on the upper reaches of its lunar landscape. The race then heads up the east coast of the country, cuts through the mountains and swoops back through Milan in three weeks time.

The epic 257km run through the Ardennes culminated with four of the hottest racers in the world contesting the finish, with Tour de France winner Tadej Pogacar and Swiss Marc Hirschi also in the mix. Alaphilippe moved left from a lead position to knock Hirschi and Pogacar out of contention but as the Frenchman raised his arms, Roglic continued racing and beat the Frenchman over the line.

He was then relegated to fifth by race officials.

“He moved, hit my wheel, that can happen,” said Hirschi.

That left three Slovenians in the top four with Pogacar second and Matej Mohoric fourth behind Hirschi. The win marks a redemption for Roglic, who led the Tour de France for two weeks before a final-day meltdown. Instead of going under, the former ski-jumper can now close his season with a prestige win.

“It’s unbelievable. It was so close. It goes to show you can never stop believing and never stop pushing until the last centimetre,” said the 30-year-old Roglic.