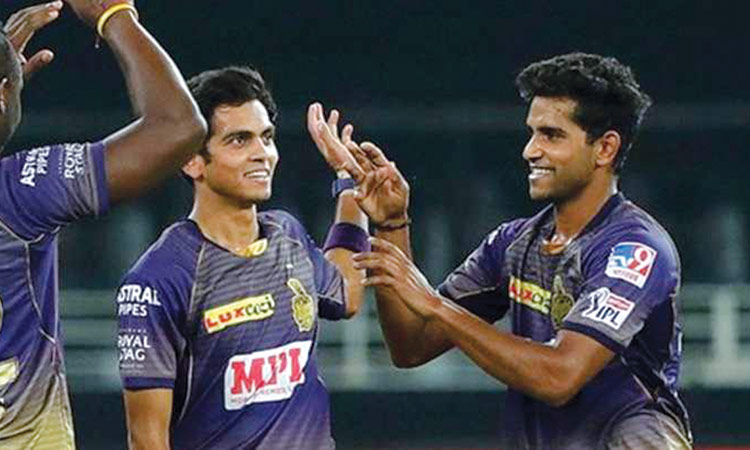 While Kamlesh Nagarkoti (left) had figures of 2/13 off two overs, Shivam Mavi returned 2/20 in four overs and was declared man of the match. Courtesy: IPL website

Dubai: Kolkata Knight Riders’ (KKR) young players were the stars of the show once again on Wednesday as they beat Rajasthan Royals (RR) by 37 runs and captain Dinesh Karthik couldn’t be happier for them.

After 21-year-old Shubman Gill earlier starred with an unbeaten 70, Shivam Mavi, 21, and Kamlesh Nagarkoti, 20, starred with the ball at the Dubai International Cricket Ground on Wednesday.

“It’s a very special thing - these boys, the journey they’ve gone through when not playing, and for them to just come out and express themselves with the ball and ball was incredible,” said Karthik in the post-match presentation ceremony.

While Nagarkoti recorded figures of 2/13 in the two overs he bowled, Mavi returned 2/20 in four overs and was declared player of the match. The two were crucial in ensuring that RR were restricted to a meagre 137/9. Gill was the top scorer for KKR with 47 off 34 as they scored 174/6.

Mavi said that he stuck to normal lines and lengths in the beginning as the ball was seaming around. “It was a little different after seeing the wicket, thought it would be flat. But it was seaming around so I kept it tight. I’ve played against some of these big players before so I knew what they would do, so I made sure I just stuck to the lines and lengths,” he said.

Meanwhile, RR captain Steve Smith admitted on Wednesday that their batsmen may have had some difficulty adjusting to the Dubai International Cricket Stadium after playing both their matches before this at the significantly smaller Sharjah Cricket Stadium.

RR suffered a comprehensive 37-run defeat at the hands of Kolkata Knight Riders (KKR) after being restricted to 137/9 while chasing 175 for victory.

“Didn’t quite go as per plans. That happens in T20 cricket sometimes... We have a few areas to improve on, and keep moving forward,” Smith said at the post-match presentation ceremony.

“Few of us still thought that we were playing in Sharjah. It did (feel a lot different), the far side is a very big side and we didn’t see too many balls going there and the other side is slightly shorter,” he said.

Smith said that the team “probably didn’t adapt to the dimensions and the wicket”.

“We also dropped a few catches which cost us. It is about forming whatever XI is best for the conditions we are facing... We will wait and see. Disappointing tonight but we need to keep moving forward,” he said.

Smith also ended up facing his Australia teammate and star fast bowler Pat Cummins. He fell to Cummins in the latter’s very first over having made just three runs.

“It wasn’t a great battle (with Cummins), he won easily... Spoke to him now and he said you smack those in the nets, sometimes you just get a good one,” he said.