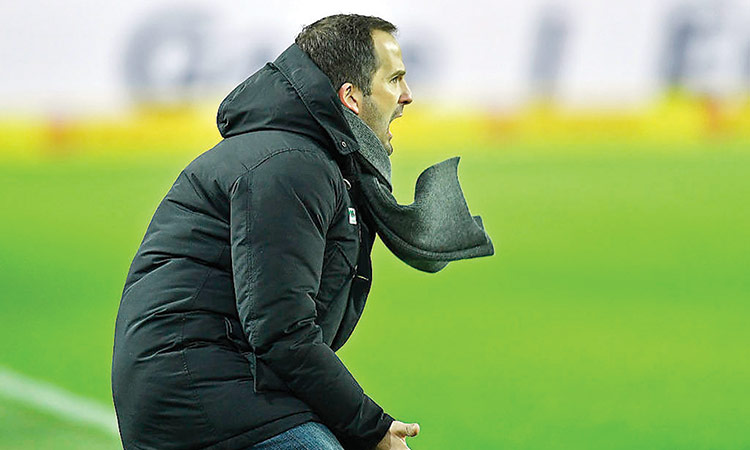 Manuel Baum (above) takes over from David Wagner, who started Schalke’s 2019-20 season strongly before the winless run began in January. File / Associated Press

GELSENKIRCHEN: Schalke hired Manuel Baum as coach on Wednesday amid a club-record run of 18 games without a victory.

Baum agreed to a two-year contract with the Bundesliga club. The coach of the Germany under-18 team previously led Augsburg in the Bundesliga from 2016 until last year.

Baum takes over from David Wagner, who started the 2019-20 season strongly before the winless run began in January. Schalke’s current league campaign started with an 8-0 loss at Bayern Munich followed by a 3-1 loss to Werder Bremen at home on Saturday. Wagner was fired on Sunday.

Baum’s first game in charge will be at Leipzig on Saturday. Baum will be without Ozan Kabak after the Schalke central defender was banned four games Wednesday and fined 15,000 euros ($17,600) for spitting at Bremen left back Ludwig Augustinsson.

Schalke published accounts Wednesday showing a crash in revenue as the coronavirus pandemic forced the Bundesliga to complete its season in empty stadiums. Overall revenue fell to 102.1 million euros ($119.5 million) from 151.3 million ($177.1 million) in the first half of 2019.

The biggest single reason for the drop was the lower TV income from not qualifying for the Champions League. However, Schalke also reported falling income across the board for game-day revenue, catering, sponsorship and merchandizing.

“In each of these areas, business operations came to a complete or partial standstill in the second quarter of 2020,” the club said.

The accounts cover a period including regular Bundesliga games in front of fans in early 2020, the shutdown amid the pandemic and the season finishing in empty stadiums by the end of June.