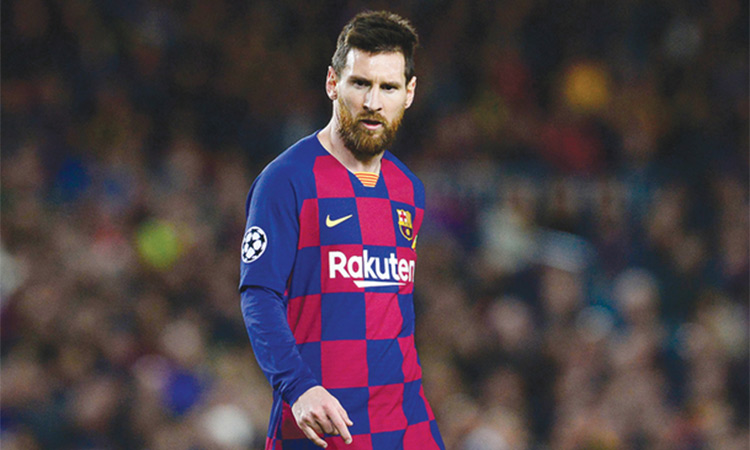 The only way for Barcelona to reach their goals is to keep ‘united and rowing in the same direction,’ insists Lionel Messi. File / Agence France-Presse

Barcelona coach Ronald Koeman has said Lionel Messi’s happiness is not in his hands but admits he was pleased to hear the Argentine saying on Tuesday he wants to end his disputes with the club.

Messi had earlier called for “an end” to arguments at Barcelona as he urged unity at the club he tried to leave before the season.

The Barcelona captain spoke to Barcelona newspaper Sport  in an interview published online late on Tuesday.

“After so many disagreements, I would like to put an end to it,” said Messi.

“We must unite all Barcelona’s people and assume that the best is yet to come.”

Messi referred to his attempt to force Barcelona to release him from the final year of his contract after the disastrous end to last season left the club without a trophy.

“I take responsibility for my mistakes, that, if they existed, were only to make a better and stronger FC Barcelona,” said the Argentine.

“I wanted to send a message to all the club members and to all the fans. If any of them is bothered for a second by something I said or did, they should never doubt that I am always thinking about what is best for the club.”

“Adding passion and desire will be the only way to achieve our objectives, always united and pulling in the same direction,” said Messi, who last Friday criticised the way Barcelona had let Luis Suarez go saying “the truth is nothing surprises me anymore.”

“I don’t know if after Messi’s words I will have a quiet life as coach of Barcelona, I don’t think so, there is always something, but of course it is very positive that the captain has come out like that asking us to be united,” Koeman said in a press conference on Wednesday.

“This was very positive and hopefully everything will be a bit quieter than it has been recently.”

Koeman was asked if he thinks Messi is happy at Barcelona. “I don’t know if I have that sort of thing in my hands. As a coach we have to look to make a better team for him, where he can shine, and look for a position in the team where he can deliver the best performances that he has always delivered for this club.

“I have seen in these four weeks that he lives for football, even in training matches he does everything to win and I think that winning matches is the remedy for Leo to be happy in this team.”

Koeman also confirmed Ajax defender Sergino Dest is “almost certain” to join Barca, with the 19-year-old expected to complete his medical on Wednesday before completing the move.

The signing of Dest would continue the shake-up at Barcelona, who have allowed Luis Suarez, Ivan Rakitic, Arturo Vidal and Nelson Semedo all to leave as they try to reduce the wage bill and refresh their squad

Dest will offer competition at right-back after Semedo was sold to Wolves. “Sergino is doing his medical and still the contract has to be signed so until he has signed, I prefer not to give an opinion,” Koeman said.

“But it’s almost certain that he will be here and then we will have a young full-back. It’s also a matter of changing things, having young players for the future of this Barca.”

Koeman said the future of Ousmane Dembele, who has been linked with a move to Manchester United before the end of the transfer window, is not up to him.

“The first thing to say is it’s up to the club and the player,” said Koeman. “While the player is with us, I am going to count on him. He has not played the last match because there are other players and Ansu (Fati) has shown he is a very good player for this team so he has to wait for his chance to play. He was better physically in the first few weeks, he had a little dip last week, but today he has trained well, so I want to say I am counting on him.”