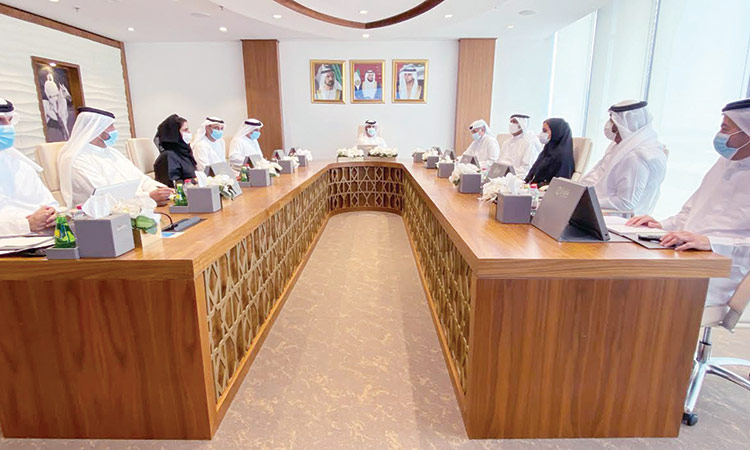 Sheikh Mansoor says choosing the UAE to host a major tournament like IPL at this particular time has great significance and is indicative of the world’s trust in the country’s handling of the COVID-19 pandemic.

Sheikh Mansoor Bin Mohammed Bin Rashid Al Maktoum, Chairman of Dubai Sports Council, has congratulated the stakeholders for the scintillating start and organisational success of the 13th edition of the Indian Premier League (IPL) in the UAE.

Organised by the Board of Control for Cricket in India in cooperation with the Emirates Cricket Board and other government entities, the much-anticipated 2020 edition of the start studded Twenty20 Indian cricket league kicked off on Sept.19 in the UAE, with no fans but lots of sizzling action and sensational finishes, especially in Dubai where two of the five matches until now have finished in the Super Over, which is the cricketing equivalent of a Penalty Shootout.

Sheikh Mansoor said: “The UAE has always welcomed the world with open arms and, thanks to our visionary leadership, we have available all the ingredients needed for the success of any event taking place on our soil, whether it is a sports event, economic or any other.

“The hospitality of the people of UAE is renowned across the world, and we are always keen to support and cooperate with everyone who seeks our assistance.

“The decision of our friends from India to host one the world’s premier sporting events here is a confirmation of UAE’s distinctive position on the global sports map and our ability to organise major tournaments in different sports because of our top-notch sports, hospitality and tourism infrastructure.”

He added: “Choosing UAE to host this major tournament at this particular time has great significance and is indicative of the world’s trust and confidence in UAE’s handling of the COVID-19 pandemic. Players and officials from around the world are here for the IPL, and they are here because they feel safe and secure in the UAE.

“Their confidence and trust is a badge of honour for us, and a tribute to the wisdom of our leadership as well as the great work done by our COVID-19 heroes in the first line of defence, and, of course, the cooperation of the members of the community. Together, we have successfully checked the advance of the pandemic and reopened every sphere of life, and the IPL is clear proof of that.

“Our confidence in the precautionary measures put in place by the federal authorities and other government entities in the emirates of Abu Dhabi, Dubai and Sharjah, and the mechanisms for their implementation, made us agree to host the IPL without any hesitation, despite the challenges involved in hosting a tournament of this magnitude and prestige, with hundreds of players and officials involved, and millions of fans glued to the proceedings.”

Sheikh Mansoor concluded: “We are keen to continue hosting local and international sporting events in accordance with the precautionary measures and protocols in place, and we have succeeded, in cooperation with Dubai’s Supreme Committee of Crisis and Disaster Management and other relevant authorities, in organising and hosting various local and international sports events since reopening Dubai’s sports sector.”

The IPL is one of the most-watched sporting events in the world, with top players from around the globe taking part. Launched in 2008, the franchise-based Twenty20 cricket league has grown in stature since, and in 2014, it was ranked sixth among all sports league in the world in terms of average attendance.

The brand value of the 2019 Indian Premier League was estimated to be $6.7 billion, according to New York-based financial consultancy firm Duff & Phelps, and it had viewership in excess of 462 million.

The 13th edition of the league will see a total of 60 matches will being played here in the UAE across 56 days, with the final taking place on Nov.10 at the magnificent Dubai International Stadium in Dubai Sports City. Abu Dhabi’s Sheikh Zayed Cricket Stadium and the Sharjah Cricket Association Stadium are the other hosts for the tournament.