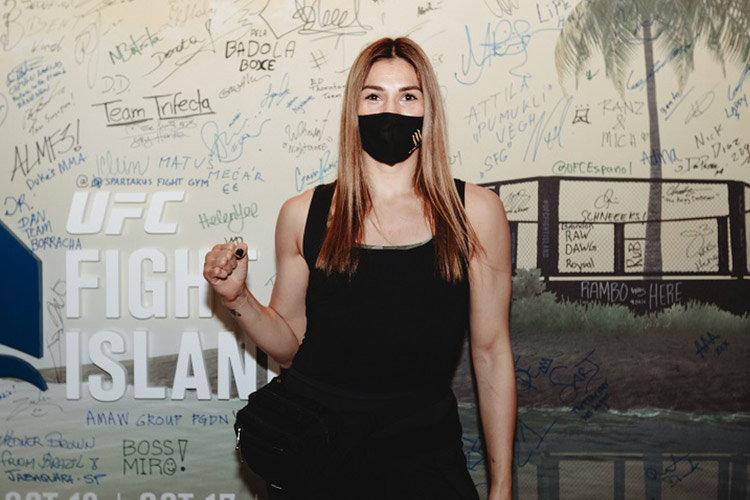 Irene Aldana poses for a picture after arriving at the UFC Fight Island in Abu Dhabi on Tuesday.

The main card competitors, American Holm and her Mexican competitor, Aldana, are now in their 48-hour quarantine in preparation for their eagerly awaited match-up on Oct.4.

Fellow fighters Julianna Pena and Germaine de Randamie also checked in, along with Dequan Townsend, Jinh Yu Frey, and Court McGee. All the athletes were given a safety briefing upon arrival.

Meanwhile, Abu Dhabi has reinforced its reputation as a world-class destination for sporting events and commitment to the highest standards of health and safety with a ‘memorable’ opening to Return to UFC Fight Island. The colossal five-event mega series, in partnership with UFC®, is taking place on Yas Island from Sept.27 to Oct.25.

Weeks of planning, preparation quarantining, sanitisation and health and safety precautions were rewarded when some of the world’s best athletes took to the Octagon at Flash Forum to deliver an action-packed UFC 253: Adesanya vs Costa, on Sunday, the first event in the highly anticipated series. The mega-event will also feature a further three UFC Fight Nights and UFC 254:  Khabib Nurmagomedov vs Justin Gaethje over the next four weeks.

During the past few weeks, the impressive UFC Fight Island™ 6km² safe zone ‘bubble’ on Yas Island, which has become a global benchmark for international event bubbles, has witnessed extensive sanitisation work, approximately 6,500 COVID-19 tests and the implementation of stringent health and safety measures to ensure the well-being of more 2,500 people. This includes all UFC event personnel and essential employees necessary to ensure the operational continuity of Yas Island.

With the health and safety measures in place, the fighters were able to focus on the competition, and it showed, with an evening of top-class action and a special occasion for Abu Dhabi, UFC® and the watching world, according to Return to Fight Island organisers.

“Through the dedication and commitment of our UFC partners, fighters and our stakeholders to bring Fight Island back, to the support from everybody inside the safe zone in quarantining and adhering to the health and safety measures, we have been able to demonstrate Abu Dhabi’s great capability is a global destination for international events,” said Ali Hassan Al Shaiba, Executive Director of Tourism and Marketing at the Department of Culture and Tourism – Abu Dhabi (DCT Abu Dhabi).

“Thanks to the hard work and dedication from everybody involved in event, we witnessed a truly memorable evening at UFC 253.

“What a way to start a series that further positions Abu Dhabi as a leader in the global revival of live sports events. As we prepare to reopen our doors to visitors once again very soon, Return to Fight Island is a testament to the lengths we are prepared to go to, to safeguard the wellbeing of our visitors and deliver unrivalled, unforgettable experiences.”

The fighters themselves have also praised the robust health and safety measures and hospitality in the UFC Fight Island ‘safe zone’, which has been on lockdown for more than three weeks in preparation for the event.

Danilo Marques, who recorded the first victory of Return to Fight Island with victory over Khadis Ibragimov in a light heavyweight clash, described his experience as a “dream come true”.