What we saw from Tewatia in nets is what we saw in Cottrell’s over: Smith - GulfToday

What we saw from Tewatia in nets is what we saw in Cottrell’s over: Smith 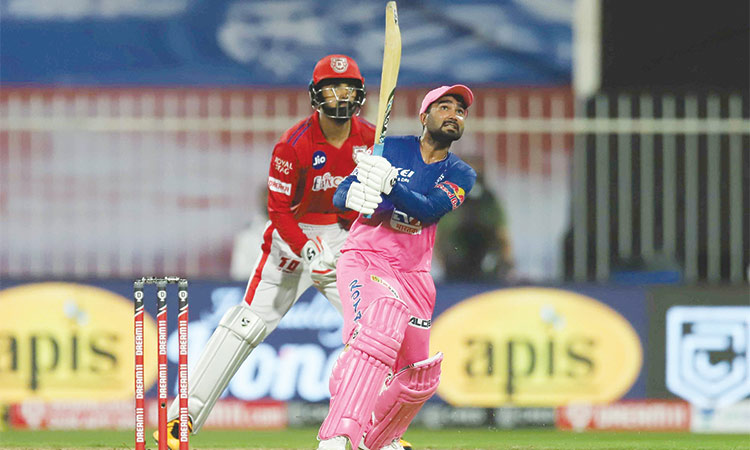 Rajasthan Royals skipper Steve Smith was all smiles after his team pulled off a record chase to beat Kings XI Punjab by four wickets on Sunday in Sharjah.

Rahul Tewatia turned it around for himself and his team when he hit give sixes off the 18th over bowled by Sheldon Cottrell and Smith said that this exactly what the team sees the 27-year-old do in the nets all the time.

“What we have seen from Tewatia in the nets is what we saw in that Cottrell’s over,” said Smith in the post-match presentation ceremony. “I told someone as along as he gets one, floodgates will open. He showed heart. He told me during the timeout we still believe.”

Tewatia was hardly able to get ball on bat before he went after Cottrell and RR were banking on Sanju Samson yet again. Samson scored his second consecutive half century and was dismissed on 85 off 42 balls.

“Sanju is striking the ball cleanly all over the ground. Taking pressure off everyone. We will have to adapt to the bigger grounds, but these shots would clear everywhere,” said Smith.

Smith had chosen to bowl first. His decision seamed to have backfired when Kings XI Punjab creamed 223/2 but Rajasthan’s fireworks allowed them to get to 226/6 with three balls to spare.

“That was something else, wasn’t it? Generally it gets wetter so I thought we were in with a chance at the halfway mark. A lot of sixes hit here. We gave ourselves the chance. Yeah, good to get over the line,” he said.

Don’t compare Samson with Dhoni: Gambhir, Sreesanth: While all the limelight was taken away by Tewatia during Royals’ historic win over Kings XI Punjab, it was the incredible innings from Samson which laid the platform for the Smith-led side during their chase at the Sharjah Cricket Stadium. Taking note of Samson’s innings on Sunday, Congress MP Shashi Tharoor said on Twitter: “What an absolutely incredible win for Rajasthan Royals! I’ve known Sanju Samson for a decade and told him when he was 14 that he would one day be the next MS Dhoni.”

However, Gautam Gambhir and S Sreesanth don’t want the 25-year-old to be compared with the former India captain.

“Sanju Samson doesn’t need to be next anyone. He will be ‘the’ Sanju Samson of Indian cricket,” tweeted Gambhir replying to Tharoor.

“He is not next Dhoni, he is Sanju Samson the one and only. He should have been playing from 2015 regularly in all formats. Please don’t compare him, if he had given right opportunities then, he would have been playing like this for India and would have won World Cups,” said Sreesanth while replying to the Congress MP. Rajasthan Royals brand ambassador Shane Warne had praised Samson and said it was shocking to see that a talent like Samson is not a part of Team India across all formats.

Rahul has been in incredible form in the ongoing edition of the IPL  He has so far scored 222 runs in three matches, including one hundred and a half century for KXIP and sits at the top of the charts in the list of leading run scorers.

“He is a captain in the making as he said recently “I have watched Virat (Kohli), thinking like a captain.” And when you’re a wicket-keeper, you automatically think a lot, so it’s going to be amazing,” he added.

Best save ever seen in my life: Sachin on Pooran’s fielding effort:  Master Blaster Sachin Tendulkar was full of praise for Nicholas Pooran after the West Indian came out with a stunning fielding effort during Punjab’s crushing defeat by Royals.

In the eighth over of Royals’ chase of 224, Samson played a pull shot off Murugan Ashwin and it was then that Pooran, standing at deep mid-wicket, dived full length over the rope to catch the ball. The West Indian caught the ball while hanging in the air and realising that he wouldn’t be able to come inside the boundary line, he threw the ball -- all while being in air -- back inside the boundary line to save his team vital six runs.

“This is the best save I have seen in my life. Simply incredible!!” Tendulkar tweeted during the match on Sunday.