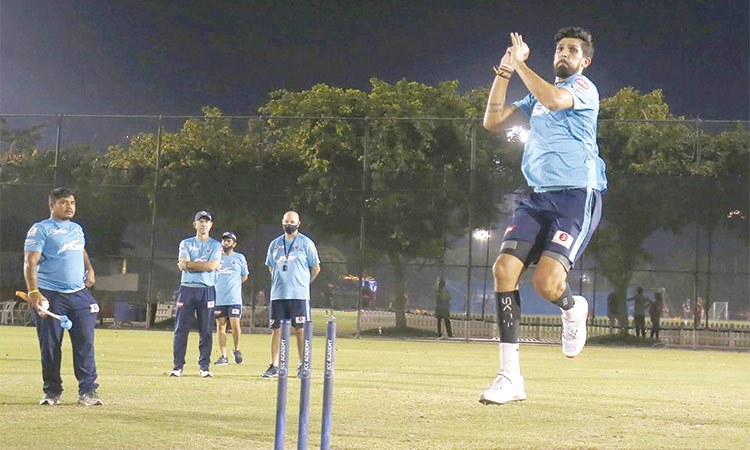 A buoyant Delhi Capitals (DC) will look to extend their winning streak with a win over Sunrisers Hyderabad (SRH) in their IPL match on Tuesday.

Delhi have won both their matches and are on the top of the table while Hyderabad still have to open their account.

Delhi have won both the matches riding on superb bowling performances by their bowlers. In the first match, Rabada bowled an excellent Super Over, conceding just two runs and sending back both the Punjab batsmen, which left very little for their own batsmen to do.

The African pace duo of Rabada and Nortje has been outstanding for Delhi, who are pushing for their maiden title.

In their last match against Chennai Super Kings (CSK) the pace duo shared five out of seven wickets, with Rabada picking up three and Nortje two. Patel was the only other wicket-taker, claiming one scalp, while one batsman was run out.

“They have lost both their matches; obviously there will be pressure on them. But this is just the initial stages, so pressure will be not be that much. But we don’t want to talk about such things in the dressing room, rather we focus on ourselves,” said Mishra in a virtual press conference ahead of the match.

“We are in good rhythm but that does not mean we are complacent. We will give our best and stick to our plans against Hyderabad. We will not take them lightly,” he added.

Mishra is the second highest wicket-taker in the IPL after Mumbai India’s Lasith Malinga, who pulled out of the tournament due to personal reasons.

Mishra has 157 scalps in 148 games. Though he went wicket-less in his first match against Chennai, he did bowl a tight line, conceding just 23 runs in his four overs.

Mishra also expects the Abu Dhabi pitch to be slow and take turn when they step into the Zayed Stadium for their first match in the UAE capital.

“I hope Abu Dhabi pitch will be slow and support batsmen. They will get a plenty of time to play their shots. The batsmen will have slight advantage, So the bowlers need to have a proper plan in place to tackle them.”

He was all praise for their Australian coach Ricky Ponting.

“He has played so much cricket that he knows the mentality of each and every player. He knows what to say to whom when and where.

“He always ends up motivating every one in the dressing room and is always positive.”

“Shreyas is a wonderful captain. The best thing about him is that he gives full freedom to his players and let them set the fielding according to their plans. He backs you all the time and I expect he will grow as a captain,” added the wily spinner.

On the hand, a down and beaten Hyderabad will look to end their skid and bounce back in the tournament with a victory.

They are likely to be bolstered by the return of New Zealand batsmen Kane Williamson in their fold.

Hyderabad began their campaign on a losing note with two defeats in as many matches. In their first match, they looked set to win the match against Royal Challengers Bangalore before Yuzvendar Chahal triggered a dramatic collapse. Chahal returned with match-winning figures of 3-18 as Hyderabad lost seven wickets for just 32 runs.

In the second match also, they could manage to post just 142 despite losing only four wickets. Wirddhiman Saha, who played a painstakingly slow innings, is likely to make way for Williamson.

In both the matches, they have been let down by their batting and will hope the return of their Kiwi star batsman makes a positive impact.