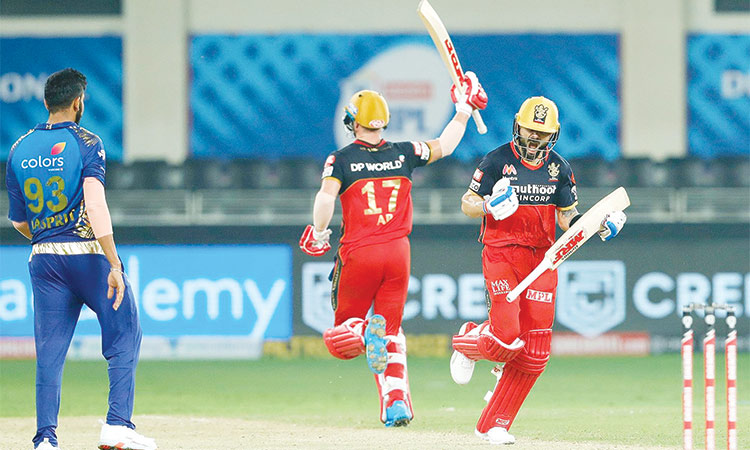 RCB’s Virat Kohli (front) and AB de Villiers celebrate after the win against MI in their IPL match in Dubai on Monday. Courtesy: Twitter

Virat Kohli and AB de Villiers held their nerves to steer Royal Challengers Bangalore (RCB) to a nail-biting victory over Mumbai Indians in the Super Over in their Indian Premier League (IPL) match in Dubai on Monday.

Needing eight runs to win, a resolute Kohli came out in  the middle with dependable De Villiers to lead from the front.

On the first two balls, they took two singles. De Villiers survived a caught behind appeal off the third delivery after the third umpire turned down the decision of the on-field umpire.

De Villiers hit a boundary off the fourth ball to bring the equation down to two off two. He took a leg bye on the penultimate delivery before Kohli pulled Jasprit Bumrah for a boundary to seal a thrilling victory. For Mumbai, Hardik Pandya and a tired Kieron Pollard could muster only seven runs in the Super Over.

Earlier, a late batting blitz by Pollard (60) and a fighting (99) by Ishan Kishan forced the match into the Super Over.

Mumbai were struggling at 78-4 in 11.2 overs before Pollard came out. They were almost written off even before the match ended. As they needed 123 runs off 7.4 overs with their top four batsmen back in the pavilion. Pollard cutting loose, smashed an unbeaten 24-ball 60 with the help of three fours and five sixes, taking the match into the Super Over.

Kishan also played a stupendous knock of 99 runs off 58 deliveries to wage a single-handed battle, before he was joined by the West Indian. He hit nine sixes and two fours.

Chasing, Mumbai’s openers Sharma and Quiton De Kock (14) hit Boult for 14 runs in the first over. Kohli brought Sundar into the attack, who lived up to the expectations of his skipper. He choked Sharma with three consecutive dot balls as a result of which the frustrated Mumbai skipper lost his cool. He took the aerial route in a bid to clear the boundary,  only to be caught by substitute P Negi at deep mid-wicket.

In the next over, Surya Kumar Yadav (0) edged a simple catch to De Villiers as Mumbai were left in tatters. Mumbai kept on losing wickets at regular intervals. However, Aaron Finch and Devdutt Padikkal laid down a solid foundation with an 81-run stand for the first wicket.

Not only did they keep wickets in hand but also scored at a fast pace. At the end of the first power play, Bangalore were 59/0 – their best so far.

Both the batsmen cruised nicely and kept the scoreboard moving, hitting the occasional boundary to spur the run rate.

Finch was more brutal of the two as he raced to his fifty with a boundary off Chahar in just 31 deliveries, before holing out to Pollard off Trent Boult. Virat Kohli’s bad form with the bat continued. He scored just three runs off ten balls. After Kohli left, South African AB de Villiers joined Padikkal in the middle to put their innings back on track.

De Villiers hit a quick-fire 55 off 24 balls while Padikkal brought up his second fifty off 37 deliveries.