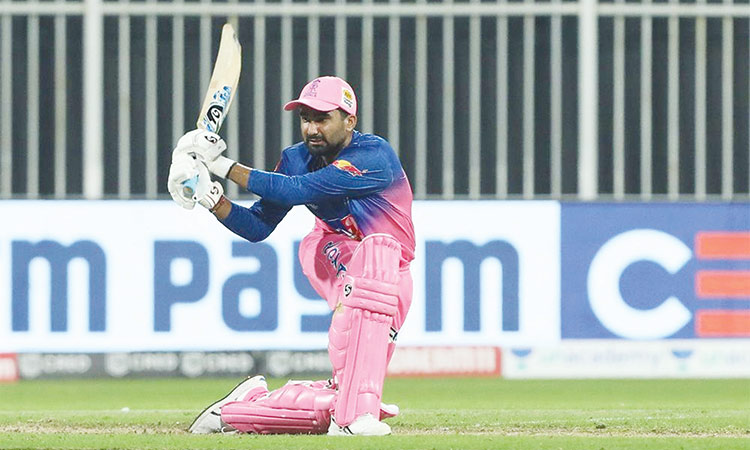 Raul Tewatia of Rajasthan Royals plays a shot against Kings XI Punjab during their IPL match in Sharjah on Sunday. Courtesy: Twitter

Sharjah: It was a batting mayhem at the Sharjah Stadium as Rajasthan Royals chased down a mammoth total of 223 runs to emerge winners against Kings XI Punjab by four wickets with two balls to spare in their Indian Premier League (IPL) match on Sunday.

A dead Sharjah pitch once again turned out be the graveyard of the bowlers as no embellishment in their repertoire could stop their carnage.

After Mayank Agarwal (106) and KL Rahul steered Kings to 223/2, batting blitzes by Steve Smith (50), Sanju Samson (85) and Raul Tewatia (53) saw Rajasthan go over the line in a nail-biting thriller.


Skipper Smith led from the front and set the tone for successful chase with a quick-fire 50 of 27 deliveries with the help of seven fours and two sixes.

Rajasthan lost the first wicket of Jos Buttler early to be pushed on the backfoot while chasing the biggest total of the IPL 2020 so far.

But, a resolute Smith had different plans, he refused to give up without a fight. He began the bloodshed and backed Samson as well to play bravely.

He shared an 81-run partnership with Samson for the second wicket and took the score to 100 in just nine overs as the duo put the Kings’ attack to the sword after being treated in the same manner.

After the dismissal of Smith, who holed out to Mohammad Shami off James Nisham, Samson took centre stage. He started cutting loose and heaped a never-ending misery on the Punjab bowlers.

Samson added 61 runs with Tewatia for the third wicket in seven overs. This was the period when the Rajasthan run rate had come down briefly but significantly and Punjab had started fancying their chances again. Out of these seven overs, four were bowled by an economical Ravi Bishnoi, who conceded just 34 runs in four overs, when others were being punished brutally.

Samson hit a 42-ball 85 with the help of four boundaries and seven over the fence before falling prey to Mohammad Shami.

When Samson got out, Tewatia was batting on 14 off 21 as he started very slow. Rajasthan still needed 62 off 23 deliveries, which looked an uphill task.

Tewatia changed gears and took the responsibility of seeing his team through on his shoulders as though trying to redeem for his bowling howler, when he conceded 19 runs in an over.

He smacked five sixes off Sheldon Cottrell, four of them coming off the first four successive deliveries. He brought the equation down to 21 needed off 12 balls. In the penultimate over of the innings, Shami got rid of Robin Uthappa (5) off the first ball. England all-rounder Jofra Archer, who came out in the middle, tonked the Punjab pacer for two consecutive sixes and took a single. Tewatia hit another six to bring up his fifty and all but ending the hopes of Punjab’s hopes. He lost the battle to Shami, winning the war for his team as they needed just two runs off the last over. Tom Curran hit Ashwin for a four to complete the formalities.

The exuberant Punjab duo played a mesmerising innings to enthral the cricket fans across the globe with an unprecedented batting display in the IPL in the UAE.

With awesome fireworks they lighted up the iconic Sharjah Stadium, which would have been reverberating with the echoes of the fans, had the tournament been held in normal circumstances.