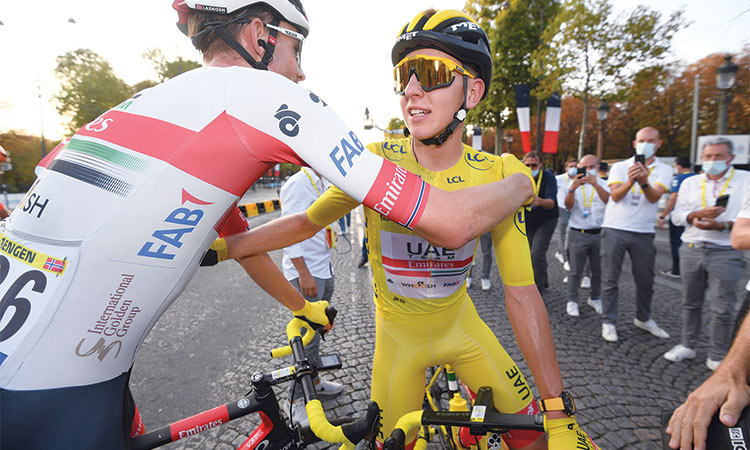 This year’s worlds have been shortened to four races and moved from Switzerland to Imola in Italy because of local Covid-19 restrictions.

UAE Team Emirates’ Pogacar, who became the Tour’s youngest champion since 1904 aged 21, will be joined by the man he pipped to the yellow jersey Primoz Roglic in Slovenia colours for Sunday’s 258.2km race which starts and ends on the Enzo e Dino Ferrari automobile circuit.

“Now that I won Tour de France, for sure I need to find new goals,” Pogacar said after last weekend’s win in the French capital.

“I will try to defend my Tour de France title but next is the World Championships, so this is my goal in the coming days.

“In the future, I just want to be at my best and try to win again,” he added.

Two members of the Arkea-Samic team have been targeted in a doping investigation since the end of the Grand Boucle but rider Nairo Quintana is set to feature for Colombia this weekend.

Thomas will be making his first appearances at the event and expects plenty of competition over the relatively flat 31.7km run.

“I’d like to think I’ll be fighting for a medal. I’ve never ridden a worlds time trial,” he told his Watts Occuring podcast.

“I think Filippo Gana. He’s going really well. But Wout Van Aert, he’s got to be up there. He’s not slowing down. Tom Dumoulin, I think he’ll be up there fighting for medals.

“It’s really short for worlds, and it’s not too lumpy either, it’s only around 200 metres of climbing. It’s right up Gana’s street. I’m looking forward to it,” he added.

Breggen wins: Defending champion Chloe Dygert of the US crashed out while leading the women’s individual time-trial at the Road World Championships on Thursday allowing Dutch rider Anna van der Breggen claim her first gold in the event.

Favourite Dygert had been leading the field with the best split time halfway through the 31.7km race only to lose her balance, turning off the road, crashing over a security barrier and into a ditch.

“Dygert was on track to win her second ITT World Championship, but has abandoned the race after her crash over the guard rail. All we know is that she is conscious and talking,” USA cycling said.

“We are in contact with our coaches and Chloe’s team on the ground in Italy. We will post a report on her condition as soon as we have absolute clear confirmation as to her condition.”

The accident renewed suspense in the race the 23-year-old had been dominating with a 26sec lead on Swiss rider Marlen Reusser and 36sec advantage on van der Breggen.

European champion van der Breggen turned the situation around in the second half of the race-against-the-clock in Emilia-Romagna.

The 30-year-old finished 15 seconds ahead of Reusser, to end her run of four consecutive silver medals since 2016, with fellow Dutchwomen Ellen van Dijk third at 31sec.

“I had no idea where I was,” said van der Breggen.

“I told Danny Stam (sporting director) not to give me the half-way split.

“I just wanted to go as fast as possible to the finish. It was only when I crossed the line that I knew I had won.”

Olympic road race champion Van der Breggen won time-trial silver at the Rio Olympics in 2016, and world road race gold in 2018, but had settled for four successive runner-up spots in the time-trial at worlds.

It was the second victory in a week for the Dutchwoman after the women’s Giro d’Italia last Saturday under the jersey of her new team Boels-Dolmans.