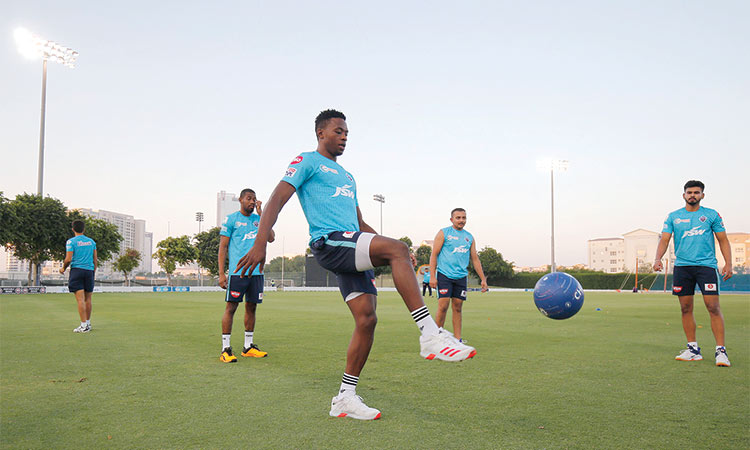 Delhi Capitals players attend a training session ahead of their match against Chennai Super Kings in Dubai. Courtesy: Twitter

Skipper MS Dhoni, who was trolled for not leading from the front by former greats and fans alike, will be under the scanner and his every move will be scrutinised.

After winning the toss and choosing to field, Chennai bowlers failed miserably to live up to the expectations of their captain and leaked too many runs. But once again, Dhoni was blamed for failing to read the pitch properly.

Riding on batting blitzes by captain Steve Smith and Sanju Samson, Rajasthan set an almost insurmountable total of 216 to emerge winners by 16 runs.

It was a veritable bloodshed for the Chennai bowlers, who were looking in a hurry to complete the 20 overs quickly rather than trying to thwart a rampaging Rajasthan. First Samson and Smith plundered CSK’s hapless bowling attack before Jofra Archer heaped more misery by smacking a whopping 30 runs off the last over.

Chennai did try to launch a late challenge to Rajasthan, led by the two most experienced batsmen of the team, Dhoni their captain cool and Faf Du Plessis, who has been excellent and reliable like always, hitting two fifties in as many games.

But even their effort was a tad too late and Dhoni had to face flak for coming in at number seven and promoting the lesser-experienced Gaikwad and Kedar Jadhav up the batting order ahead of him. Don’t forget, Dhoni was praised for the same strategy when he promoted Sam Curran and it yielded a positive result against Mumbai Indians in the tournament’s opener.

Dhoni will have to look for some other bowling options as their leading wicket-taker Piyush Chawla, conceded 55 runs and the new South African recruit Lungi Ngidi, who is a specialist death over bowler, went for 56.

The two frontline bowlers leaked away 111 runs between them in their combined eight overs, whilst picking up just a wicket each. For the record, Chawla is the third highest wicket-taker in IPL after Lasith Malinga and Amir Mishra.

Chennai are fretting over the fitness of Dwayne Bravo, who is nursing a niggling injury. Bravo’s inclusion in the side will give Dhoni options both in batting and bowling.

He recently became the first bowler to take 500 wickets in T20s across all tournaments while playing in this season’s Caribbean Premier League. Chennai are likely to ring in quite a few changes in their line-up against a confident Delhi.

Meanwhile, Capitals, who are pushing for their maiden IPL title, are brimming with confidence after eking out a narrow win against Kings XI Punjab in the Super Over.

Delhi’s will once again rely on their bowlers. They have the one of the most potent bowling attacks. Kagiso Rabada, who has been the highest wicket-taker in the last two seasons, can torment any batsman with his raw pace and forms a lethal combo with countryman Anrich Nortje.

Rabada conceded just two runs in the Super Over after Australian all-rounder Marcus Stoinis bowled a superb last over to take the match into the decider.

Stoinis had a great debut as he picked up one wicket for 14 runs after steering a reeling Capitals to a fighting total with a blitzkrieg 21-ball 53. The good news for Delhi is that Ravichandran Ashwin is fit and may feature in the playing XI. Ashwin’s return will be a big boost for the Capitals. He picked up two wickets, conceding just two runs in his only over before getting injured.