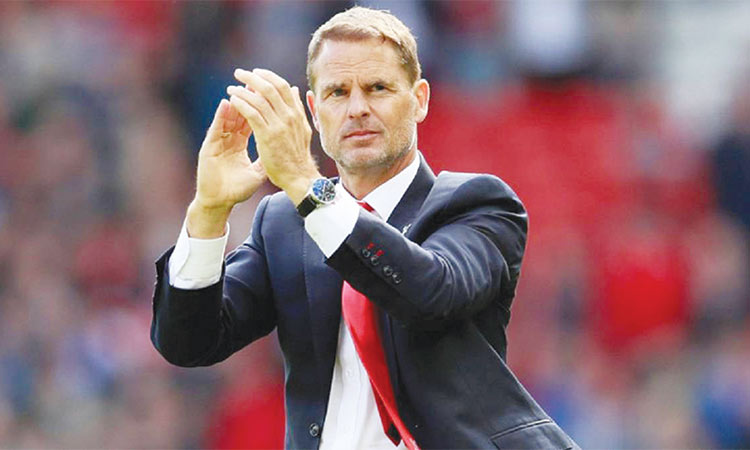 AMSTERDAM: Frank de Boer has emerged as the most likely candidate to be named coach of the Netherlands after weeks of speculation over who would succeed Ronald Koeman.

A contract up to the 2022 World Cup finals in Qatar is expected to be signed in time for De Boer to take charge of the team’s three internationals next month, Dutch media reported on Wednesday.

He would replace Koeman who left last month to become Barcelona coach.

“Together with the prime minister, it is the most important job in the Netherlands, everyone is talking about it,” said De Boer on Dutch television last week when he was asked whether he would be interested in the job.

The subject of Koeman’s replacement has dominated Dutch sports programmes in recent weeks with pundits offering their own insider versions of the selection process.

It has included the Dutch football association (KNVB) contacting both Frank Rijkaard and Bayer Leverkusen coach Peter Bosz first as potential candidates before entering into talks with De Boer.

Dutch captain Virgil van Dijk told reporters after their Nations League matches this month that the players had given a list of their preferences to the KNVB.

Advertisement Louis van Gaal, who has twice previously coached the national team, left the door open to a possible return when questioned on TV but the prospect was vetoed by the players, reports added.

De Boer, who won 112 caps and played at two World Cups for the Netherlands, was last at Atlanta United in Major League Soccer but left in July after 18 months in charge.

He would be thrust quickly into the new job with a friendly against Mexico in Amsterdam on Oct. 7 before Nations League matches away against Bosnia on Oct. 11 and Italy on Oct. 14.

SIMONSSON PASSES AWAY: Meanwhile, former Swede international Agne Simonsson, a striker who scored a goal for Sweden in the 1958 World Cup final and later briefly played for Real Madrid, has died. He was 84.

The Swedish soccer federation and Simonsson’s former club Orgryte IS both announced the death on Wednesday, but did not specify the cause.

Simonsson scored Sweden’s second goal in the 1958 World Cup final, but the host country lost to Brazil 5-2. Pele, who was then only 17 years old, scored two goals in the same match for the champions.

“One of the greatest has passed away,” Orgryte IS said of Simonsson.

Simonsson made 51 appearances for Sweden’s national team and scored 27 goals, including four in the 1958 World Cup tournament.