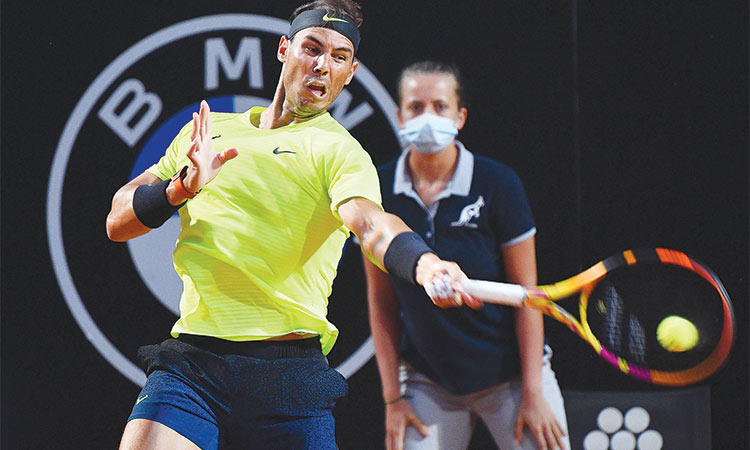 Rome: Rafael Nadal remains ‘number one favourite’ for Roland Garros, rival Novak Djokovic said on Monday, despite saying the Spaniard’s last-eight exit at the Italian Open showed he can be beaten on clay.

Nadal, a 12-time Roland Garros winner, lost in the quarter-finals of the Italian Open to world number 15 Diego Schwartzman.

“Even though he lost this week, I still think, a lot of people will agree, he’s the number one favourite and, the record that he has there, the history of his results, you just can’t put anybody in front of him,” said Djokovic.

World number one Djokovic beat Argentine Schwartzman 7-5, 6-3 in Monday’s final to win a fifth Rome title, and a record 36th Masters crown to move one better than Nadal.

“But, you know, definitely Diego showed that Nadal is beatable on clay,” added the Serb.

Conditions in Roland Garros could also have an impact, with the tournament pushed back to autumn because of the coronavirus pandemic.

Nadal “prefers high bounces, that it is hot, that the ball goes fast,” said Djokovic, the French Open champion in 2016.

“So let’s see. It’s going to be interesting. I think even though he’s the number one favourite, I think there are players that can win against him there.”

Schwartzman agreed that Nadal was the favourite.

“Rafa is the king. It’s his house. He went to Roland Garros many years playing good, sometimes not playing his best and he won.

“I think Rafa is always there, the guy who is going to win.”

Player fails Covid test: Roland Garros officials said on Monday that a female player in the qualifying competition had tested positive for Covid-19 and withdrawn.

Five other players suffered the same fate the day before, organisers said.

Men’s qualifying began on Monday while the women start on Tuesday, trying to earn a place in the rescheduled clay-court major which runs from September 27 to October 11.

“In total, about 900 tests have been carried out since Thursday,” tournament officials said.

Tournament director Guy Forget said earlier in September that players would be tested “upon their arrival and will receive their accreditation as soon as the first negative test is returned.”

In his first match in over six months, Rafael Nadal swept aside fellow Spaniard Pablo Carreno Busta on Wednesday to reach the third round of the Italian Open.