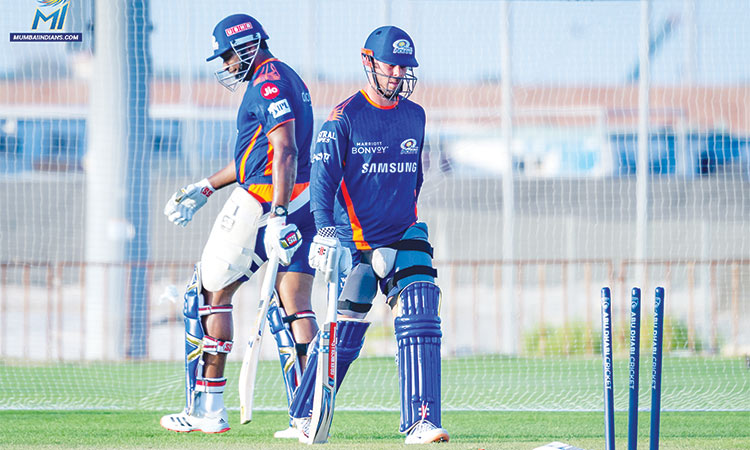 Mumbai Indians (MI) will look to break the jinx of losing in the UAE and put their campaign back on track with a victory over Kolkata Knight Riders (KKR) at the Sheikh Zayed Stadium in Abu Dhabi on Wednesday.

MI lost their sixth consecutive game on the UAE soil, when they were defeated by Chennai Super Kings (CSK) by five wickets in their opening match of the IPL on Saturday.

They will look to exorcise the demons of the past and look for a new start. MI lost all their five matches in the UAE in 2014. They seem to have picked up whence they left six years ago. This will be playing somewhere on the back of their mind sub-consciously.

The MI middle-order failed miserably after getting a fiery start from the openers and could not put a big total. South African batsmen Faf du Plessis and India’s Ambati Rayudu shared a century partnership to anchor the innings after some early setbacks. MI bowlers also failed to capitalise on the early advantage and could not maintain the pressure after taking two early wickets, which had put CSK on the backfoot for a while.

However, going into the match MI will have a psychological advantage of having beaten their opponents for a whopping 19 times in 25 games. MI will hope their explosive middle order, which features hard-hitting batsmen like West Indies Kieron Pollard and Hardik Pandya, will redeem.

Captain Rohit Sharma and Quinton De Kock will be leading the batting charge and will look to give MI an explosive start, setting the tone for a huge total. MI front line bowlers will have to focus on choking the flow of runs, which will put pressure on KKR batsmen and they may play some loose shots, giving away their wickets in the process.

Not losing the wickets in the first three overs will be a key to putting up a big total on these pitches in Dubai. However, slower bowlers are likely to play a vital role for both the teams as has been witnessed so far in the tournament. Jasprit Bumrah conceded more than 40 runs in his four overs. The absence of their star pacer Sri Lanka’s great Lasit Mailnga, who is the highest wicket taker in the IPL, was thoroughly missed. Malinga pulled out of IPL due to personal reasons.

Meanwhile, KKR will start afresh in the tournament with no pressure of already having been beaten. The other consolation for them can be driven from the fact that they went on to win the IPL title, when the first half of the tournament was held in the UAE.

A new-look KKR will look to start their campaign on a winning note. They have released players like openers Chris Lynn, Robin Uthappa and spinner Piyush Chawla.

They have bolstered their squad with some new exciting signings. They roped in Australian pacer Pat Cummins and England T20 World Cup winning captain Eoin Morgan.

With the likes of Tom Banton, Andre Russell and Morgan, their batting line-up is one of the strongest in the tourney. Slower bowlers Sunil Narine, Kuldeep Yadav, and wily spinner Varun Chakravarthy are likely to play a key role in their IPL campaign. Cummins along with Lockie Ferguson will spearhead the pace battery.

KKR skipper Dinesh Karthik said he is relishing the prospect of playing their first match against a strong team like MI.

“MI have world-class players. They have strong line-up and have the most number of IPL titles. It’s good to play against them early on in the tournament,” said Karthik in a pre-match virtual press conference.

“Every year is a different year. I am sure it will be a great game tomorrow,” he added on Tuesday.

The skipper also hinted that Shubman Gill and Narine may open the innings for the two-time champions.

“Shubman is a quality player. I am sure he will live up to the expectations and will make a good opening pair with Narine,” he stressed.