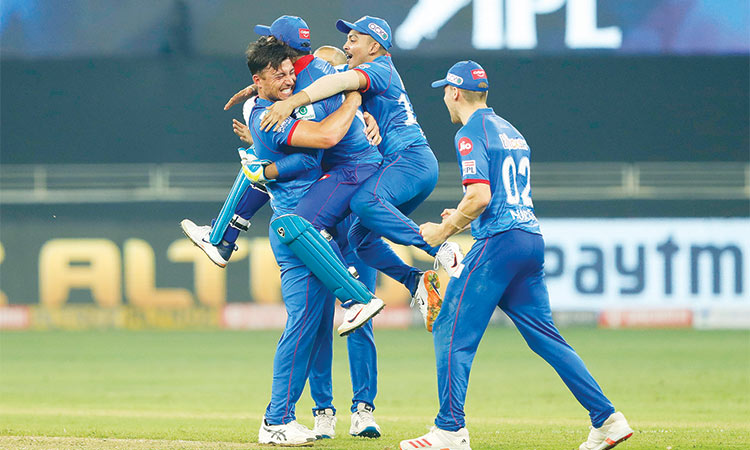 Delhi Capitals players celebrate after their victory over Kings XI Punjab in their IPL match on Sunday. Courtesy: Twiiter

Stoinis smashed 53 off 21 balls to drag DC to 157/8 and when KXIP needed one to win off the last three balls, he took two consecutive wickets to take the game into the Super Over.

“It’s a weird game, sometimes the luck goes your way, but it’s easy to become the villain from the hero. So it’s important to enjoy the good days,” said Stoinis in the post-match presentation ceremony in which he was declared player of the match.

“I try to close down the areas where the bowlers can bowl, and it worked today. It’s important to feed off everyone’s energy,” he said.

DC were on 127/7 at the end of the penultimate over of their innings at the Dubai International Stadium after which Stoinis smashed 26 runs off Chris Jordan in the final over.

Additionally, the over included a wide and a dramatic final ball in which Stoinis was run out after taking a run but Jordan had overstepped. Anrich Nortje and Rabada ran two runs off the free-hit to make 30 runs off the over.

“It’s nice that the IPL has gotten going again, and tonight has been great entertainment. I thought KG bowled a beautiful over, and I don’t have any qualms about not batting in the super over - I think the left-right batting combination was the right thing,” he said.

Meanwhile, Delhi Capitals captain Shreyas Iyer was all praise for his bowlers and Marcus Stoinis after their dramatic win over Kings XI Punjab in the Super Over.

“It was difficult to stand out there and see the game turning in different directions,” said Shreyas in the post-match presentation ceremony.

“I would like to say we are used to this. Even last season we faced these. KG (Kagiso Rabada) is the winning performer, and the way Stoinis batted was game-changing.”

Rabada bowled the Super Over and took the two required wickets when KXIP were on just two runs. Shreyas also reckoned that the sixth over bowled by Ravichandran Ashwin was also an important turning point.

Ashwin, playing against the team he captained last season, took a wicket off his very first ball of the match and another off the fifth ball of the over.

“It was important for us to get wickets, since the total was small, and I knew if I saved KG’s over for the end it would be helpful. Ashwin’s over was a key one, and it changed the game in our favour, but that’s what T20 cricket is,” he said.

Ashwin injured himself while fielding and walked off with a sling and an ice pack on his hand. Shreyas said that the physio will take the final call, although the spinner himself is confident of playing the next match.

“Ashwin says he’ll be ready for the next game, but in the end the physio is going to decide,” he said.

KXIP captain KL Rahul said that the result was “bittersweet”.

“If at the end of 10 overs, if you had said this match is going to a Super Over, I would have taken it. It’s still our first game, so lots of learning,” he said.

Rahul also praised Mayank Agarwal, who scored 89 off 60 balls to take KXIP close to the target.