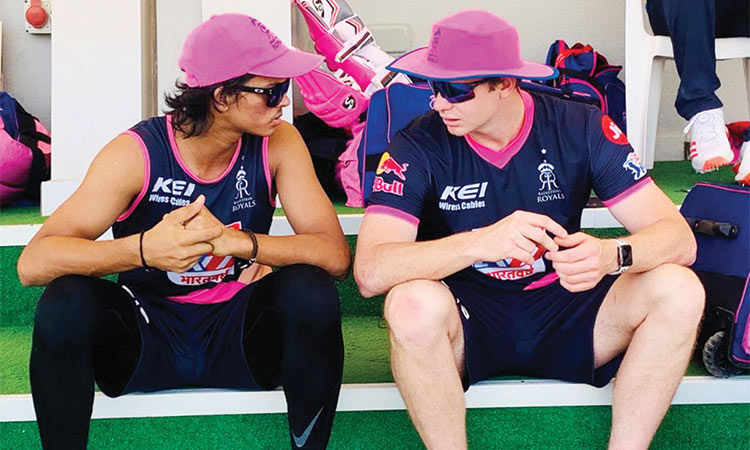 Rajasthan Royal’s Yashasvi Jaiswal and Steve Smith (right) talk during a training session ahead of their IPL match. Courtesy: Twitter

A confident Chennai Super Kings (CSK) will look to extend their winning streak against a depleted Rajasthan Royals (RR) in their second match of the Indian Premier League (IPL) in Sharjah on Tuesday.

CSK defeated Mumbai Indians by five wickets in their opening match of the IPL to start their campaign on a positive note.

While CSK’s batting looks quite impressive, openers Murli Vijay and Australian Shane Watson will also seek redemption by putting up a good performance after failing to deliver in the opening game.

CSK will once again pin hopes on their formidable middle-order to deliver. In the first match, South African batsman Faf Du Plessis and India’s Ambati Rayudu shared a century partnership to anchor the faltering innings to steer their team to an unlikely win after being pushed on the back foot by the MI bowlers early on.

Sam Curran also had a great debut with CSK as he took the important wicket of Quinton De Kock, took two catches and hit a vital 6-ball 18 to help them go over the line.

“Boys have not played much cricket in the past few months. It is always nice to get off to a winning start in any tournament” said Curran.

CSK bowlers too were clinical in the field. After an early onslaught by MI openers, they did well to pull the things back and kept on taking the wickets at regular intervals.

The Chennai bowlers thwarted MI from piling up a big total and that played a crucial role in Chennai’s five-wicket victory.

Meanwhile, Royals are fretting over the absence of some of the key players in their first match against the three-time champions.

He came here with his family that breaches a bio-secure bubble. So he has to undergo a six-day quarantine period instead of three.

Moreover, star all-rounder Ben Stokes will not be available for a few matches as he is in New Zealand with his ailing father.

Smith was struck on the side of the helmet during training early this month and was ruled out of the three England one-day internationals with signs of concussion.

“Been in Dubai for a couple of days now with some good rest and then got into a bit of running,” Smith was quoted saying in a franchise statement on Monday.

“Yesterday I did a bit of zig-zag running, which is part of the protocols to pass to get back to play and today I’ll have a hit in the nets.

“Hopefully, pull up well from the hit and be good to play tomorrow.”

Royals will also hope Buttler replicates his 2019 form when he scored a whopping 311 runs in eight matches. The Englishman is expected to set the tone with an explosive start in the later matches along with Sanju Samson. Jofra Archer is likely to spearhead the pace battery with Jaydev Unadkat, Oshane Thomas and Varun Aaron.

“Obviously missed three ODIs in England because of injury. Came to Dubai a couple of days ago and had some running yesterday as a part of protocol to pass the fitness test. Today, I will get to training,” Smith said.

“The boys have been there for over a month. We were getting the news that they have been training well. It is good to catch up with the old and new guys in the team. We have a very strong squad this year.”