VIDEO: Stoinis, Rabada shine as Delhi down Punjab in Super Over for winning start - GulfToday 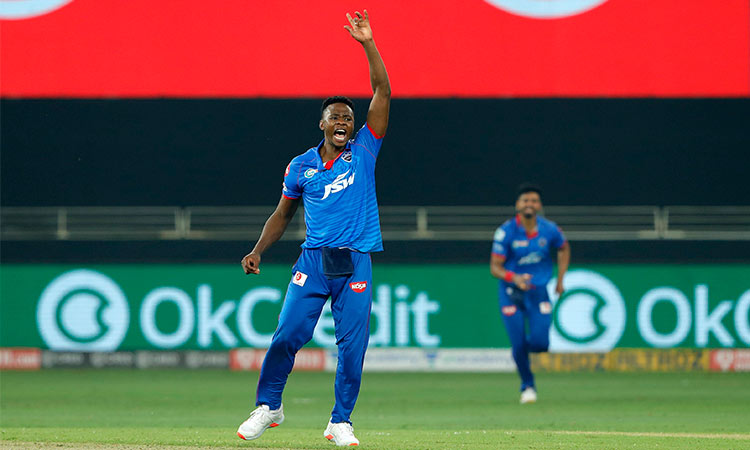 Kagiso Rabada celebrates after taking the wicket of KL Rahul in the Super Over. Courtesy: Twitter

After a thrilling finish in the regular time, Super Over turned out to be a little dull affair. Kagiso Rabada bowled a superb over to thwart Punjab.


He had KL Rahul caught by Axar Patel and uprooted the stumps of Nicholas Pooran off consecutive deliveries as Punjab could manage to score only two runs in the Super Over. Delhi got over the line with three deliveries to spare without losing any wicket.

Meanwhile, Marcus Stoinis had the match of his life as he produced a scintillating performance with both ball and bat. He scored a quick-fire 53 off 21 balls and picked up two wickets to force the match into Super Over.

Earlier, riding on a brilliant knock by opener Mayank Agarwal, Kings XI Punjab had almost pulled away an improbable victory.

Mayank waged the lone battle single-handedly as Punjab kept on losing the wickets at one end. He smashed a 60-ball 80 to steer Punjab within a touching distance of a hard-fought win before being caught by Hetmyer off the bowling of Stoinis in the 20th over.

Punjab needed 13 runs off the last overs. Mayank hit Stoinis for a six on the first ball of the over to bring the equation down to seven needed off five balls. He took a couple on the next ball and hit another boundary off the third delivery to level the scores. 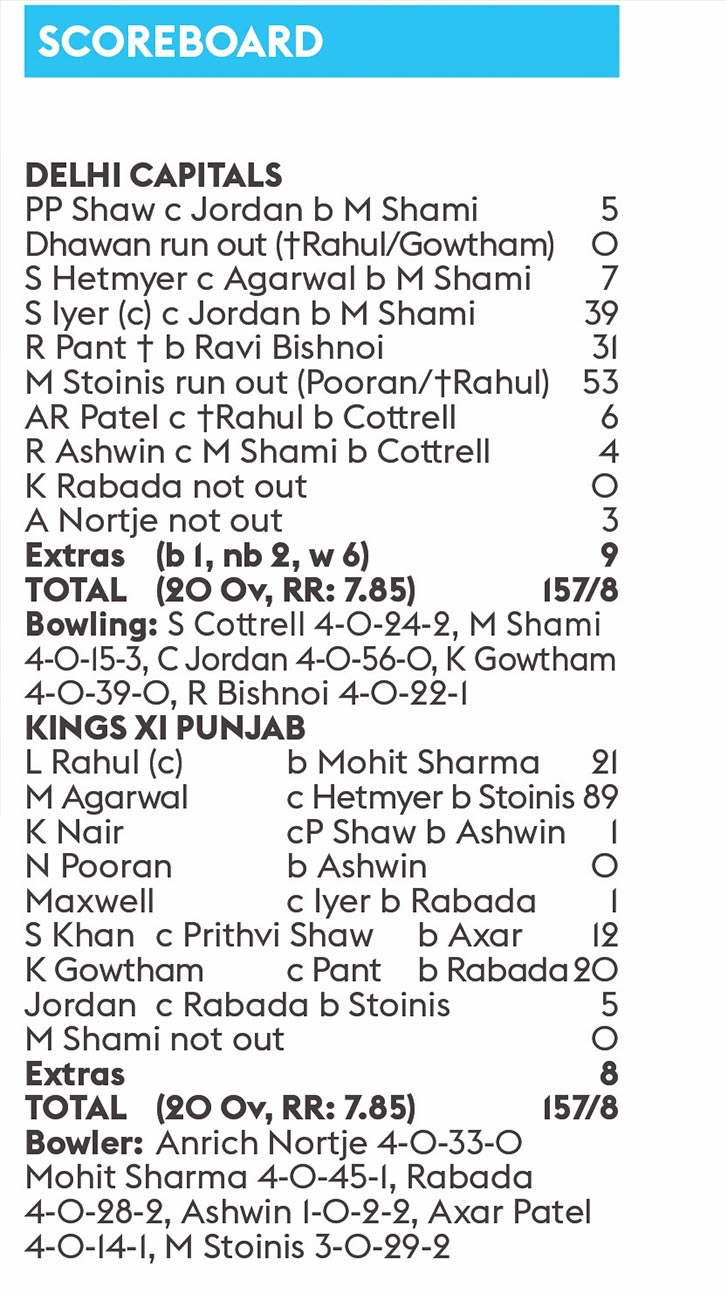 Stoinis made a comeback to deliver a dot ball. Punjab needed one off two. Stoinis refused to give up. He beat Mayank and then had him caught by Hetmyer off the penultimate delivery.  Chris Jordan was on strike with Punjab needing one off the last ball.

Jordan miscued a flick shot and the ball landed into the safe hands of Rabada as the scores were tied forcing the match to go into a Super Over.

Chasing a fighting total of 157 runs, Punjab batsmen crumbled under pressure like a stack of cards. They kept on losing the wickets at regular intervals and failed to get the partnerships going.

Punjab got off to a decent start as the opening duo of  Rahul and Mayank added 30 runs for the wicket in 4.3 overs.

Mohit Sharma, in his second spell, rattled the stumps of the skipper to give Delhi the first breakthrough. After his dismissal, Punjab lost wickets in quick succession.

Ravichandran Ashwin once again lived up to his reputation by getting rid of Karun Nair and Nicholas Pooran within a space of four deliveries. Delhi were reduced to 33-3 from 30-0.

Australian all-rounder Glenn Maxwell also failed to rekindle the 2014 magic and was sent back by the South African quick Rabada. He was caught by Iyer off a miscued shot as Delhi’s slump continued and they were tottering at 35-4. He was beaten by the sheer pace of the South African prodigy.

Punjab failed to capitalise on the early breakthrough provided by Mohammad Shami. The Indian pacer was on fire as he returned with a figure of 3-15 from his four overs.