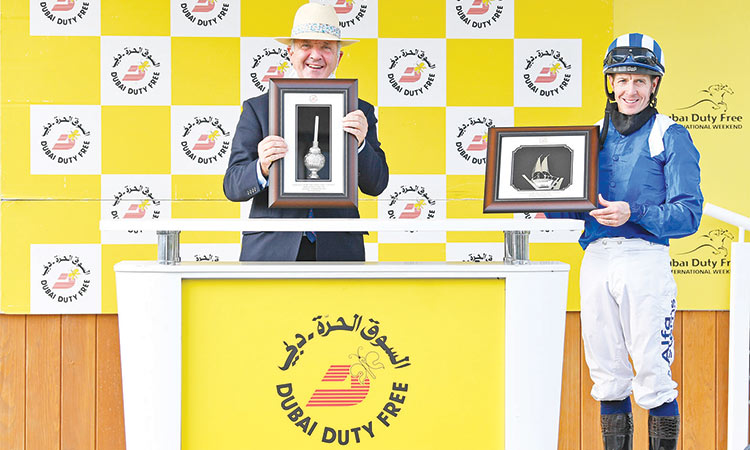 The meeting marks 25 years of outstanding support for British horseracing by the leading international airport retailer but run this year behind closed doors, forcing the absence of members of Dubai Duty Free’s (DDF) senior management team for the first time in the history of their sponsorship.

The winning trainer Marcus Tregoning, clearly excited at the colt’s future prospects said, “It is early days for this horse, it was only his third run and he’s still a work in progress. I think he’s pretty smart and he showed a good attitude today.”

The victory provided Jim Crowley with a second DDF Mill Reef Stakes and he said of Alkumait, “I was really impressed. He came back a lot better than we went down and switched off nicely in the race. It was all smooth, and he showed a good turn of foot. I would say he is right up there with the best of them this season.”

The double was initiated by the Mark Johnston-trained Erlaqam who returned to winning form in the Group 3 Dubai Duty Free Legacy Cup earlier in the afternoon beating four rivals, including Desert Encounter who was bidding to win the race for the third time.

The son of Dubawi, a Listed winner for Charlie Appleby over the same distance at Sandown Park in June, led his group of five down the centre of the course as Glamourous Anna and Ornate raced away from the rest of the field.

Lazuli was niggled along in third overall as the runners converged entering the final quarter-mile.

He responded gamely for William Buick, quickening strongly to take up the running approaching the furlong-pole before asserting in the closing stages for a length success over this year’s G1 King’s Stand Stakes fourth Tis Marvellous. Equilateral, who was runner-up in the same Royal Ascot sprint, finished a nose further back in third.

Charlie Appleby said: “I was delighted with the performance of Lazuli, who enjoyed the drop back to five furlongs and beat some very strong older sprinters. The likelihood now is that we will put him away and take him out to Dubai for the Carnival.”

Buick added: “Lazuli looked very promising at Sandown earlier in the year but then disappointed on his next start for no apparent reason. He ran well at Deauville over six furlongs, which is probably stretching him slightly, and conditions were ideal for him today.

“When he won at Sandown, he bossed the race but won in a good time and gave me a great feeling. He has shown today that he can fight for it as well, against older opposition too. He is a very fast horse, who is only a three-year-old and is going to get better next year.”

Meanwhile, Antoinette added a G1 placing on turf to her multifaceted profile when coming home a clear second in the Belmont Oaks at Belmont Park, US, on Saturday.

The Hard Spun homebred headed into the 10-furlong contest on the back of two excellent runs at Saratoga, having finished third on dirt in the G1 Coaching Club American Oaks before making the running on turf when bravely winning the Saratoga Oaks.

Antoinette was once again sent to the front of the five runners and soon established a length and a half advantage. She continued to dictate and looked to have the rest of the field in trouble when kicking for home under John Velazquez approaching the straight.

The Bill Mott-trained filly rallied in the home stretch but was unable to see off the challenge of Magic Attitude, who swooped from the rear to take up the running entering the final furlong before quickening away to score by two and a quarter lengths. Antoinette stayed on resolutely to come home another two and a quarter lengths ahead of Neige Blanche in third.

Godolphin US President Jimmy Bell said: “Antoinette produced a very good run to finish a clear second behind a very strong filly. She tried to control the race again but Magic Attitude had that finishing kick in the straight. We can have no excuses as we were second best on the day and it was still a very good effort.”