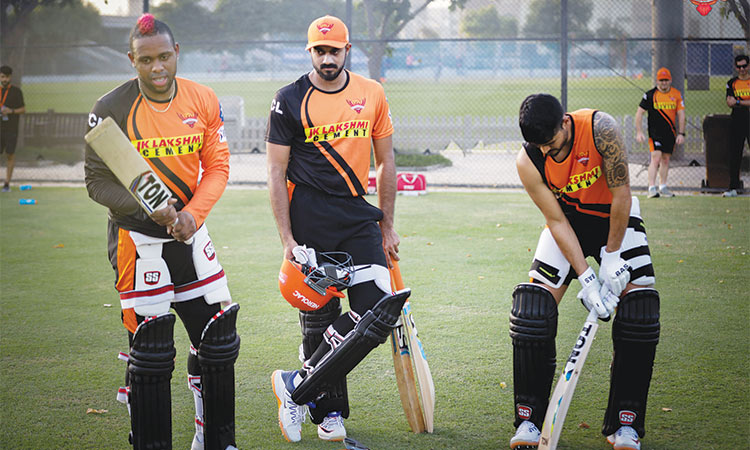 Sunrisers Hyderabad (SRH) and Royal Challengers Bangalore (RCB) will look to take early advantage with a win in their first match of the Indian Premier League (IPL) at the Dubai International Cricket Stadium on Monday.

SRH will start a bid to win their second IPL title while RCB aspire to break the jinx by winning their elusive maiden IPL crown. SRH had won the title in 2009, but then they were known as Deccan Chargers under the leadership of Australian great Adam Gilchrist.

SRH have a deep batting line-up, which can tear apart any bowling attack on a given day. Skipper David Warner along with Jonny Bairstow will lead the batting charge. Speaking about his opening partner Bairstow, Warner said: “We know when to take those calculated risks and it is time to go this year again.”

SRH have made a few changes in the team following the ban on Bangladesh all-rounder Shakib Al Hasan. He was released by the franchise after he failed to report about the bookies, who approached him for fixing. Warner said a new-look SRH will bank both on the experienced and the new guys.

“It is good to have a lot of youngsters in the middle order. They bring a lot of energy and enthusiasm and show the right kind of attitude too. I have been hearing some very good reports about it on social media and hope they translate their talent into performances on the pitch,” he added.

Virat Singh, Khaleel Ahmed, Abdul Samad and Priyam Garg are a few names, who have been included in the squad. Commenting on their picking up the playing XI, he said: “We will try our best combination. If it does not work out then we will modify our strategy and look to go as far as possible in the tourney.”

“Every team in the tournament has both world-class overseas players and good Indian players. Ours is a pretty good balanced side in all departments. The boys have to just go out there and have fun, not take it too seriously. Like if you get angry you will tend to repeat the mistakes,” he added.

The Australian is delighted to have seasoned campaigners like Kane Williamson of New Zealand in the Sunrisers ranks. He was full of adulation for veterans in the team. “We have plenty of experience with the likes of Kane, Bairstow, Vijay Shankar to name a few. We got a job on our hand for sure,” he said.

Asked if the spinners would play a big role, Warner said: “It depends on the kind of wickets on offer at the three venues.”

“Some of them might be flat, some might offer swing in the first session and some might assist the spinner in the second half of the games. We have three good spinning all-rounders in the team. So, let us wait and see how they shape up,” he informed.

IPL has been shifted to the UAE, because of the rising cases of coronavirus in India. All the matches will be played across three venues: Dubai, Abu Dhabi and Sharjah.

SRH have the Afghan duo of Rashid Khan and Mohammad Nabi, apart from Shabaz Nadeem, as specialist spinners. Warner’s side also has spin-bowling all-rounders in Fabian Allen, Sanjay Yadav, Abdul Samad, and Abhishek Sharma. Rashid said: “After a long break, everyone is coming back to the field and playing a game. It is the best opportunity for all of us to entertain the fans who are watching us back home.”

The pace attack is likely to be led by Bhuvneshwar Kumar, who hasn’t played any professional game since December 2019. The 30-year-old has 109 wickets from 86 games and is the leading wicket-taker for SRH.

On the other hand, RCB is one of the three teams in the league who are yet to win the trophy apart from Delhi and Punjab.

Virat Kohli-led RCB is the most decorated team of the IPL. They have assembled a star-studded squad which features swashbuckling South Africa’s AB de Villiers, Dale Steyn and Aaron Finch.