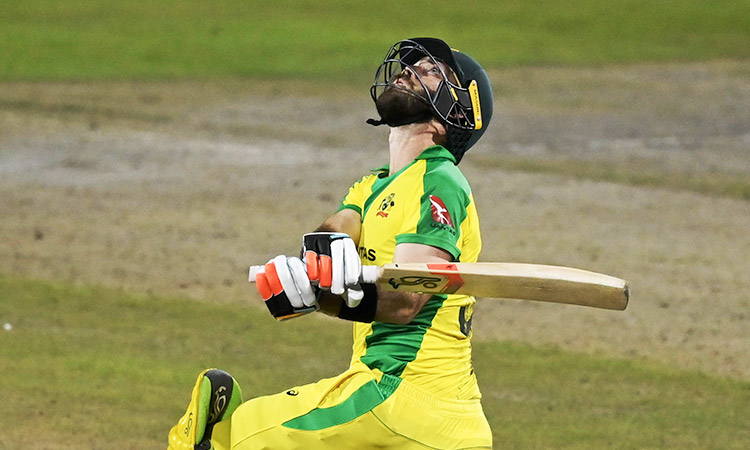 Glenn Maxwell in action during a match. File

Much to the delight of the fans and the team management it has been confirmed that the Australian will be available for the selection to play against Delhi, just 72 hours after arriving in the UAE on Sept.17.

“He will be required to complete only a three-day quarantine period instead of six as he arrived in the country from already a bio-secure bubble as per the safety protocols,” it was confirmed in a statement by the team on their social media account.

Maxwell steered Australian to an unlikely series win against England. He and Alex Carey struck centuries in a 212-run stand to help Australia reach a record target of 303.

Punjab will hope Maxwell to continue his rich vein of form at the IPL as well. Maxwell has some wonderful memories the seventh edition of the IPL, when the tournament was shifted to the UAE in 2014.

The Kings’ XI Punjab all-rounder will look to rekindle the same magic as that of 2014. He had a stellar season in 2014. Riding on his scintillating form, Kings managed to win all their matches in the UAE.

With a full 25-player squad at his disposals, coach Anil Kumble will look to get their campaign under way with a winning start in their bid for the first IPL title.

The West Indian is one of the most fearsome batsman and can blow away any attack irrespective of the opposition and conditions.

No other batsman has smashed more centuries than the Universe Boss at the IPL, with six hundreds under his belt. Mayank Agarwal, Karun Nayar and Sarfraz Khan along with Maxwell will consolidate the middle order. While West Indian all-rounder Nicholas Pooran and New Zealand’s James Neesham might play as all-rounders.

In the bowling department, Mohammed Shami and West Indian Sheldon Cottrell will spearhead the pace attack. While Punjab are likely to field three spinners because of the nature of pitch.

Meanwhile, Delhi will look bank on more than their bowling than batting. They have one of the most lethal bowling attack in the tournament with the like of South African pace duo Kagiso Rabada, Anrich Nortje and Ishant Sharma leading the pace battery.

“We saw how damaging Rabada was last year at the Kotla and that was a slow, low pitch. I think these wickets will probably be on the slower side but will offer a little more bounce. That suits guys like Rabada, Nortje, Ishant, Avesh Khan and Daniel Sams,” said Delhi coach Ponting.

With 19 out of 25 wickets coming in the death overs in the last season, Rabada stands out to be one of the strongest death over-wicket takers with an impressive average of 10.58. With a pace upgrade in the form of Nortje, it would be interesting to see the Protea duo crush through the Kings XI Punjab batting line-up.

Ravichandran Ashwin and Amit Mishra may carry the load of spin bowling on their shoulders. Mishra is the second highest wicket-taking bowler in the IPL after Lasith Malinga of Mumbai Indians.

With minimal grass covering on the pitch and high humidity at the Dubai International Cricket Stadium, the venue possesses the exact sub-continent conditions making it homely for both the teams. Boundaries being shorter at some ends, the venue will be a paradise for massive hitters from both teams.