Sancho back for more at Dortmund after snubbing United offer - GulfToday 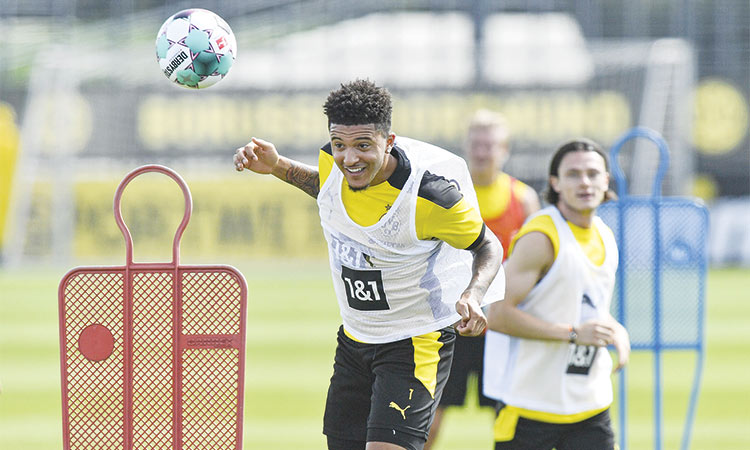 Berlin: Jadon Sancho is set to show what Manchester United have so far missed out on when he spearheads Borussia Dortmund’s challenge as the new Bundesliga season starts this weekend.

Dortmund have spent the summer rebuffing interest from United and have insisted again and again they will not sell the England winger.

After the 20-year-old netted a penalty in the 5-0 German Cup win at Duisburg on Monday, Sebastian Kehl, head of Dortmund’s player department, repeated the club line that “Jadon Sancho will play for Dortmund this season.”

Sancho is likely to partner Norwegian goal-scoring phenomenon Erling Braut Haaland, another 20-year-old, at home against fellow Champions League qualifiers Borussia Moenchengladbach on Saturday at the start of the new league season.

In an effort to protect their prize asset, Dortmund have slapped a price tag of 120 million euros ($144 million) on Sancho, who managed career-best figures of 17 goals and 16 assists last season in the Bundesliga as Dortmund finished second to Bayern Munich.

‘We plan with Jadon’:  British media spent the summer heavily linking Sancho to United, reporting they were dangling weekly wages of £250,000 on a five-year deal and that the player had already agreed terms to move to Old Trafford. Since securing Champions League qualification in July, United have been eager to sign Sancho, who is high on the wish list of manager Ole Gunnar Solskjaer.

Dortmund set a deadline of Aug. 10 for United to meet their asking price. When that passed, the German club pointed to Sancho’s contract, which he extended last year until 2023, including an undisclosed pay rise.

“We plan with Jadon. Jadon will play for BVB next season. The decision is final,” sports director Michael Zorc made clear.

However, much can happen before the transfer window closes in England and Germany on October 5. Dortmund must be careful that Sancho does not copy the tactic used by Ousmane Dembele and Pierre-Emerick Aubameyang, who went on strike to force transfers to Barcelona in 2017 and Arsenal in 2018 respectively. Sancho demonstrated why Dortmund stubbornly want to keep him when he netted an early penalty in Monday’s thrashing of Duisburg before signing Jude Bellingham. He cost 26 million euros ($30 million) from English second-tier side Birmingham City.