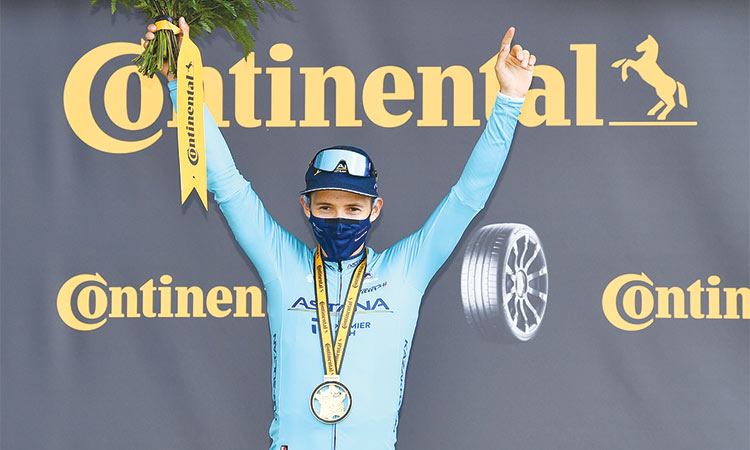 Miguel Angel Lopez celebrates on the podium after winning the 17th stage of the Tour de France on Wednesday. Associated Press

The race ascended to 2,304m altitude atop the Col de la Loze where Slovenian rookie Tadej Pogacar lost a handful of seconds to his compatriot Roglic in the race for the yellow jersey on a day the 2019 champion Egan Bernal withdrew.

“I’m glad this is behind me,” said Roglic after his toughest challenge as he merely needs to survive without a major incident to win this year’s Tour.

“Every metre counts on a climb like that,” said the 30-year-old.

Richard Carapaz produced a doomed solo bid for Ineos as the Giro champion was caught on the ever-changing gradient of the final 7km above 2,000m as the top 10 experienced a slight shake-up.

A day after the race was cleared of Covid-19 to run all the way to Paris on Sunday, French President Emmanuel Macron was present as the peloton struggled through villages full of ubiquitous baskets of flowers hanging from Swiss-style ski chalets.

In the rarefied air that suits the men from the Andes, the 26-year-old Lopez leapfrogged compatriot Rigoberto Uran and extended his lead over Adam Yates and Richie Porte. Roglic now leads his young compatriot Pogacar by 57 seconds with just three real races left before the Tour gets to Paris.

Colombian highs and lows: Suffering from a bad back for a month now Bernal, his Tour defence in tatters, said a sad goodbye to the 2020 edition when Ineos decided to protect the long-term interests of their 23-year-old captain by withdrawing him.

But his compatriot Astana captain Lopez, who is known as “Superman” in his homeland after fighting off three thieves who tried to steal his bike, gave Colombia something to shout about.

Lopez had complained earlier in the race that Jumbo’s dominance was suffocating the race, but saw his opportunity on a mentally challenging finale where the varying gradient called for constant adaptations. “I felt strong coming into the race and on the Grand Colombier, which was the first big one (climb) of the race, like the ones I train on in Colombia, I felt good,” Lopez said.

“I won many things in my life, but this is impressive and I worked so hard to get here,” said the man who has previously finished on the podium at both the Giro and the Vuelta.

The long hard 14km struggle up the Col de la Madeleine to its 2,000m summit was at the halfway point of the race.

Lopez made the difference on the even higher Meribel mountain with a sudden turn of pace while Roglic and Pogacar were watching each other.