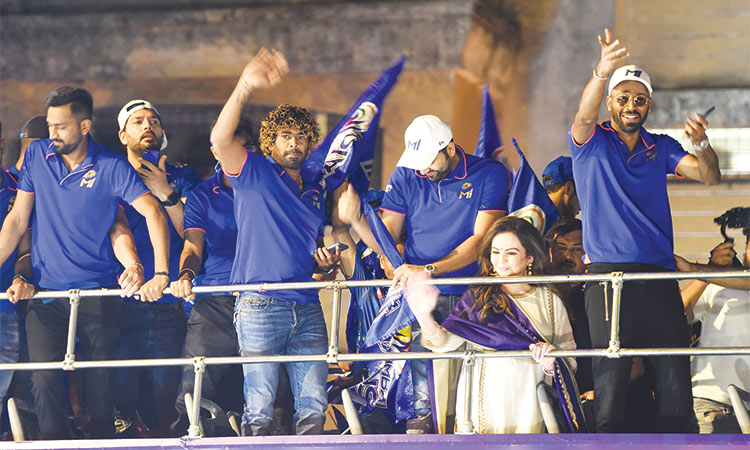 In this photo taken on May 13, 2019, Mumbai Indians’ players gesture to fans as they travel in an open bus during a trophy celebration procession after arriving in Mumbai. File / Agence France-Presse

Former Indian opener Virender Sehwag feels the upcoming edition of the Indian Premier League (IPL), which will be played in front of empty stands in the UAE, will bring joy to the fans considering the fact that cricket is being played after a long break due to Covid-19 pandemic.

“While I’m sure we’re going to miss the matches being played in front of our home crowd, the tournament promises to bring joy to us all, especially after the long break,” said Sehwag as per a media release.

Sehwag and cricket show host Samir Kochhar will come together to present an interactive cricket show ‘Power Play with Champions’ on the Flipkart app.

“Power Play with Champions on Flipkart Video brings the incentive of winning rewards, which everyone enjoys, combined with a thrilling season of cricket, there couldn’t be anything better,” said Sehwag.

“When this opportunity presented itself, there wasn’t much debate about taking it up. It’s another chance for me to stay connected with something I truly love and enjoy.

“I’m going to be testing people’s cricket knowledge and pre-emptive skills; I hope the audience is ready. It seems like exciting times ahead, with this show as well as the series,” he added.

The show will bring together Sehwag’s expertise and Samir’s repartee, as they discuss India’s favourite cricket series, while providing audiences a chance to use their cricketing knowledge to predict different aspects of the match and win many prizes. As hosts, the duo will engage in fun banter, narrate interesting incidents and share exciting cricket trivia, through the innovative format of the show.

The show, which launches on Friday, will give the users a chance to play the quiz every day. Guided by the expert opinions shared by Sehwag and Samir, the six predictive questions will challenge the users’ knowledge and predictive skills related to the game.

“I’ve had a longstanding association with cricket, and I enjoy the sport as much as any other fan. I couldn’t be more excited about hosting this interactive show with Flipkart Video, this time talking about the one thing I truly enjoy with none other than Viru paaji,” said Kochhar.

“We’ve all eagerly waited for this tournament to begin and what better way to sweeten the deal than to allow people to win prizes while enjoying the game. And while I’m going to miss the action in person, it makes me happy that I still get to keep people entertained,” he added.

Defending champions Mumbai Indians will take on Chennai Super Kings in the tournament opener on Saturday in Abu Dhabi.

Meanwhile, according to veteran Delhi Capitals spinner Amit Mishra, players will have a better idea of what to expect from the conditions on offer at the UAE only when the IPL starts. DC’s first match will be against Kings XI Punjab on Sunday.

“Everyone is focused on their individual roles and understand exactly what they have to do during the matches,” he said.

DC managed to qualify for the playoffs for the first time in seven years last season and Mishra believes his team will again be “putting in all the effort to win matches”.

MATCH REFEREES TEST NEGATIVE: Also, all 12 Indian and three foreign umpires, besides five Indian match referees, have tested negative ahead of the IPL even as they complied with the strict quarantine protocol -- during which they had limited options for watching Hindi movies in their hotel rooms in the UAE.

Their quarantine period is about to end on a positive note, and they are ready to officiate in the much-awaited 13th IPL.

Each official was tested on the first, third, and the fifth days of their six-day quarantine period, and they all have returned negative results, a Board of Control for Cricket in India (BCCI) source told IANS.

This would come as a big relief for the BCCI, particularly after 13 members of the Chennai Super Kings tested positive recently after landing in the UAE, raising a scare.

The 20 match officials underwent the mandatory Covid-19 tests as per the requirements of the local governments of the three emirates — Abu Dhabi, Dubai, and Sharjah — where 56 league matches will be played till Nov.3, besides the four play-off matches, including the final on Nov.10.