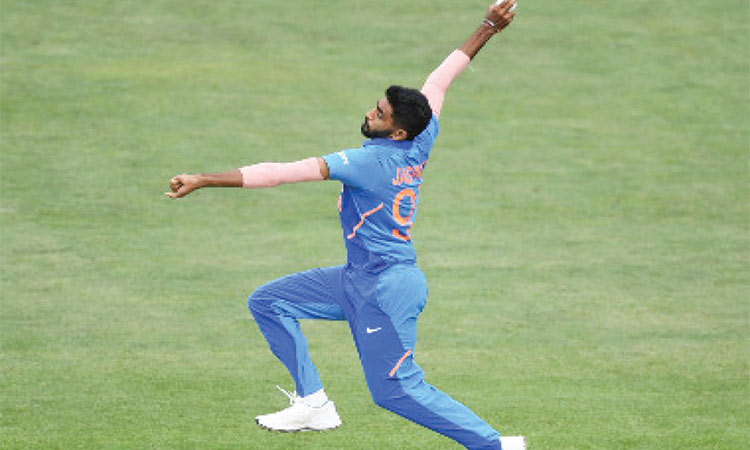 James Pattinson says he is looking forward to working with Jasprit Bumrah and Trent Boult, among others, in the Mumbai Indians’ bowling unit during the IPL. Courtesy: Twitter

Abu Dhabi: While terming Jasprit Bumrah as the best T20 bowler in the world, Australia pacer James Pattinson has said he is looking forward to working with the India pacer and New Zealand fast bowler Trent Boult, among others, in the Mumbai Indians’ bowling unit during the Indian Premier League (IPL) starting this Saturday.

“Personally, it’s just fantastic to work with some of the best bowlers in the world. Obviously, Bumrah is probably the best T20 bowler in the world. And Boulty [Trent Boult] is up there as well. So, for me it will be a great experience to be around those guys,” Pattinson said in a video shared on Mumbai Indians’ official handle.

“I have played a few ODIs here in the UAE before, so I have got a bit of experience over here in UAE.”

Pattinson also spoke about the conditions in the UAE, saying the slower ball might be used a lot on surfaces which could be slower and lower as the tournament progresses.

“The wickets are drier and there will be three wickets which will be used throughout the tournament so it will be slower and lower as the tournament goes on. May be the slower ball and stuff like that might come into play a lot more.”

Meanwhile, former South Africa all-rounder Albie Morkel feels Suresh Raina’s absence in the upcoming IPL will leave a massive gap in the Chennai Super Kings (CSK) team and that the franchise would have to make changes in their batting order to get their balance right for the tournament starting on Saturday.

Raina, who has played 193 games for CSK, accumulating more than 5,000 runs, last month opted out of IPL due to “personal reasons”. He had travelled with the team to the United Arab Emirates, but has since returned to India in a controversial manner.

“He (Raina) has been a run machine for them and electric in the field, so [his absence] will leave a massive gap,” Morkel told IANS in an exclusive interview. “They (CSK) will probably have to make a few changes now to cover for him and get the balance of the team right.”

Much of the focus on this year’s IPL will be on MS Dhoni as it would be the first time he would take the field after the ICC World Cup in England where India reached the semi-finals. Dhoni has been on a sabbatical since then and on Aug.15, he announced his retirement from international cricket.

Morkel showered praise on Dhoni. “I enjoyed my time at CSK the most. We had six very successful years, but apart from that the group of players really got along. Dhoni was the cornerstone of our success. He is someone who leads by example,” he said. “He is obviously very skillful in what he does, but also has the ability to stay calm under immense pressure. Other players reach their ‘breaking points’ before him. He knows that and takes full advantage of that.”

On South African cricket, the 39-year-old player said that Dean Elgar should lead the Proteas in Test cricket while wicketkeeper-batsman Quinton de Kock continues with his leadership duties in the limited-overs format.