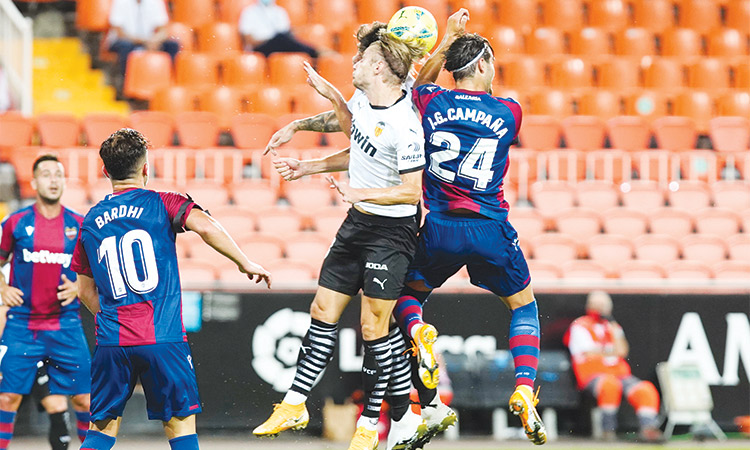 Valencia’s Daniel Wass jumps for the ball against Levante’s Jose Campana during their Spanish League match at the Ciutat de Valencia Stadium on Sunday. Associated Press

MADRID: Valencia twice came from behind to beat rivals Levante 4-2 in a thrilling city derby on Sunday, brushing aside a chaotic summer to make a winning start to the new La Liga season.

Jose Luis Morales gave Levante the lead in the opening minute and restored their advantage in the 36th after Gabriel Paulista had levelled for Javi Gracia’s side.

But Maxi Gomez equalised before halftime while Manu Vallejo put Valencia ahead for the first time in the 75th minute before sealing the points with a second strike in stoppage time, following up a shot that came off the post.

Valencia would hope to be challenging the likes of Villarreal for a place in the top four this season but several key players have been sold, with unpopular owner Peter Lim determined to improve the club’s financial situation.

Gracia said on Friday he felt “sad” because the squad had been “weakened”, a brave move given the board’s impatience with previous coaches.

Valencia looked more likely to snatch a third and Vallejo kept a cool head when it mattered, tucking a finish into the corner after a smart dummy by Maxi.

Valencia had a torrid end to the last campaign as they finished ninth in the standings after sacking two managers.

Things got worse in the close season as they parted with key players Francis Coquelin, Dani Parejo, Ezequiel Garay and Rodrigo Moreno, prompting demonstrations against Peter Lim’s ownership from fans, who also protested outside the Mestalla stadium ahead of the derby.

Also on Sunday, Unai Emery had a disappointing return to Spanish soccer as his Villarreal side could only draw 1-1 at home to promoted Huesca in an eventful game which had three goals ruled out.

Emery’s Villarreal had first-half strikes from Paco Alcacer and Raul Albiol chalked off before Pablo Maffeo, making his Huesca debut, gave the visitors the lead in the 42nd minute against the run of play.

Maffeo then gave away a penalty for handball from which Villarreal’s Gerard Moreno levelled in the 68th, while new signing Coquelin, making his debut since signing from Valencia, was carried off on a stretcher with ten minutes remaining.

Huesca could have won the match in a frantic six minutes of stoppage time, as Joaquin was denied by Villarreal goalkeeper Sergio Asenjo before team mate Jorge Pulido put the ball in the net for the visitors but the strike was ruled out for offside.

Betis beat Alaves courtesy of a stoppage time goal from Cristian Tello, giving coach Manuel Pellegrini a winning start in his first game in charge of the Seville club.

Valladolid went ahead against Sociedad in the 39th minute in the day’s other game when Michel tapped into the net following fine work by Sergi Guardiola down the wing. But they lost their lead due to a moment of madness from keeper Masip, who let a tame free kick from Roberto Lopez slip through his hands and over the line on the hour mark. 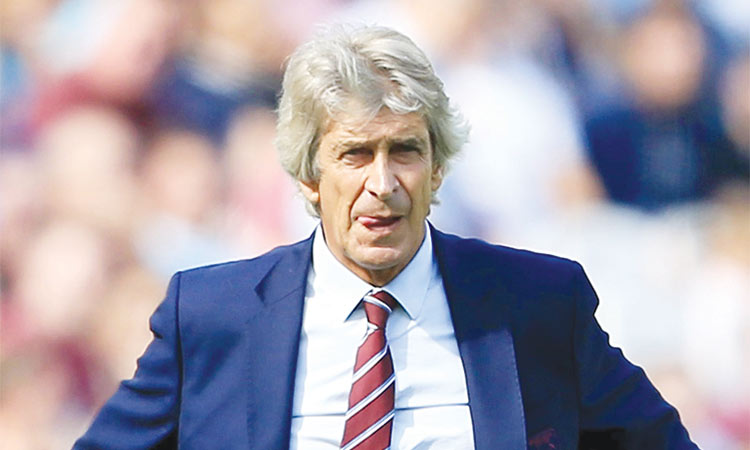 Real Betis beat Alaves 1-0 on Sunday in their first game of the La Liga season courtesy of an injury-time goal from Cristian Tello, giving coach Manuel Pellegrini a winning start in his first game in charge of the Seville club.