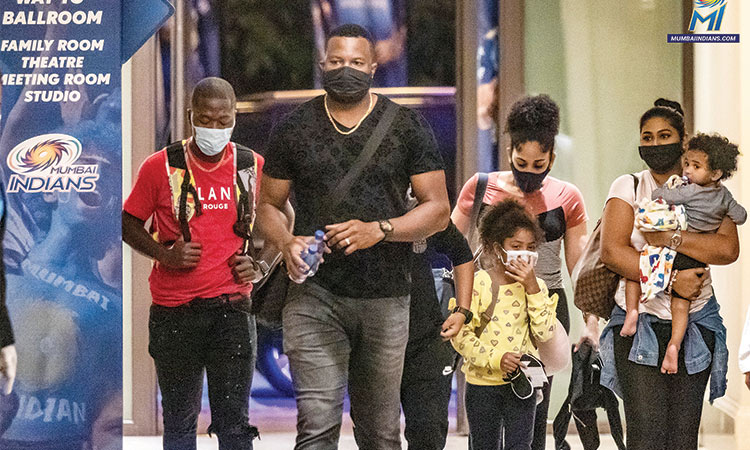 Dubai: As the Caribbean Premier League (CPL) contingent joins  their Indian Premier League (IPL) franchises in the UAE, a split loyalty may be on the rise when the cricket spectacle gets under way from Sept.19.

After the (CPL) got over, an array of stars have started arriving in the UAE to ply their trade in the upcoming IPL. Among the prominent names, who were eagerly awaited by their franchises, are the Mumbai Indians’ Kieron Pollard, Kolkata Knight Riders’ Sunil Narine and Andre Russell along with their coach Brendon McCullum and Sunrisers Hyderabad’s Mohammad Nabi of Afghanistan.

Pollard, who guided TKR to the CPL title, will sweat it out for Mumbai Indians (MI) in their quest for a record fifth IPL crown. MI are the defending champions and have been bolstered by the arrival of the Trinidadian all-rounder, who is also the captain of West Indies team in the limited overs.

Pollard is a hard-hitting batsman, who can change the complexion of any game, and a utility medium-pacer bowler. He can chip in with a few overs in the middle of the innings and choke the runs.

It will be interesting to see when he comes out against KKR in the IPL. Not only will he be up against his CPL boss but also coach McCullum.  Both the KKR and TKR are managed by New Zealand great McCullum, who has taken up the coaching assignments after a stellar career.

So, when KKR and MI come face to face in IPL, both Pollard and McCullum will have an idea about each other’s modus operandi. Pollard is in isolation and will join MI after six days for training.

Buoyed with their victory at the CPL, McCullum also must have knuckled down to chart out a map for KKR in their bid for the third prestigious title.

West Indian spinner Narine will extend his partnership with McCullum in IPL as well. Together the duo will look to recreate the magic for KKR in the team’s third title push. Russell, who plays for Tallawahs in the CPL, will be seen in KKR jersey.

In eight innings, the hard-hitting Jamaican scored 222 runs at a strike-rate of 141.40, with three half-centuries in the process. He maintained an average of 44.40 and struck 16 sixes in all. Russell’s one of the fifties came against McCullum’s TKR. In the UAE, Russell will don the KKR jersey to help them in their quest for the title.

TKR’s Dwayne Bravo, who became the first bowler to take 500 wickets in Twenty20 cricket across all the competitions, will use his exploits against KKR in the IPL.

McCullum, who planned the downfall of many teams at CPL with the West Indian all-rounder, will have to look for some strategy to stop him from using his lethal deliveries against KKR batsmen at the world’s richest league.

Bravo is a not a spearhead like Lasith Malinga, Jaspreet Bumrah, or Mitchell Starc but can produce a phenomenal effect with his slower ones to dodge the batsmen in the shortest format of the game. He picked up his 500th scalp for TKR only.