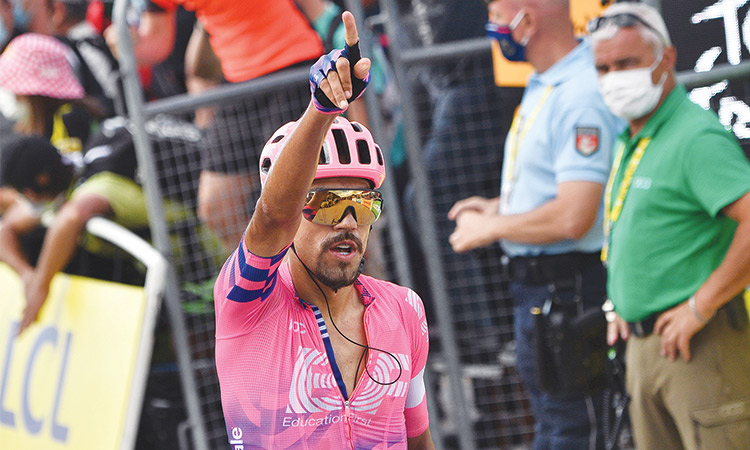 Colombia’s Daniel Felipe Martinez celebrates as he crosses the finish line to win stage 13 of the Tour de France on Friday. Associated Press

Murat: Primoz Roglic extended his lead in the Tour de France on Friday as Daniel Martinez scored a first stage win for US team Education First by triumphing in a titanic mountain battle.

Defending champion Egan Bernal dropped 37 seconds on his two key rivals, the Slovenian pair of Roglic and Tadej Pogacar, over the final kilometre of the 191.5km 13th stage.

Martinez came under extreme pressure for the stage win from fellow breakaway riders Maximilian Schachmann and Lennard Kamna as the Bora pair broke for the winning line at 1,589m of altitude and looked set to win.

Gritting his teeth and pouring with sweat, the Colombian however dug deep for a final kick that carried him to a last-gasp win.

“I managed to hold on and win with a late sprint,” said Martinez, who formed a heart with his fingers on the finish line.

Martinez won the key Tour de France warm-up, the Criterium du Dauphine, in August and also a stage on Paris-Nice.

“I did well on those races, but winning a stage on the Tour is on another level,” said the 24-year-old.

Further down the hill as the race hit a nine-percent incline on the day’s sixth and final climb, Roglic and Pogacar managed to shake off an elite clique of riders in contention to win this Tour.

Roglic now enjoys a 44sec lead over 21-year-old Pogacar, who climbed to second, while Bernal dropped to third, 59sec off the yellow jersey.

“It was a Slovenian day, there’s two of us ahead of a few Colombians,” Roglic said.

“There are great professionals in Slovenia in all kinds of sports, it’s a tough nation and we are all pushing each other.

“Looking at it from distance this Tour is not finished and (Bernal) is not finished, but I don’t want to bother myself worrying about other people,” Roglic said.

“When i saw that final climb I thought ‘pfffft, this is going to hurt’. So I’m happy it all went my way.”

Defending champion Bernal now looks under severe pressure from Roglic, who has a powerful climb team around him.

The director of Bernal’s Ineos team, Benjamin Rasch, said the 23-year-old was improving each day from a bad back and that Friday’s stage did not suit his leader.

“I gained time on everyone except Roglic on the last hill and yes we are both Slovenians but we were not friends over those final kilometres,” said Pogacar, of the UAE team.

YATES IN TIRRENO LEAD: Meanwhile, British rider Simon Yates flew clear of the other contenders on the demanding final climb to Sassotetto on Friday to take the fifth stage of Tirreno-Adriatico and the race lead.

On a warm day, Yates broke clear with 4.5km to go and outpaced the other favourites on the climb to the Apennine ski resort.

The overnight leader, Canadian Michael Woods, who had valiantly defended his leader jersey on Thursday in the first mountain stage, finished 11th at 1 minute 46 seconds.

Briton Simon Yates took the leader’s blue jersey five days after his twin Adam surrendered the yellow jersey in the Tour de France after four days in the lead.

Four-time Tour winner Chris Froome had another bad day, rolling in with a large group of tailenders more than 29 minutes down.