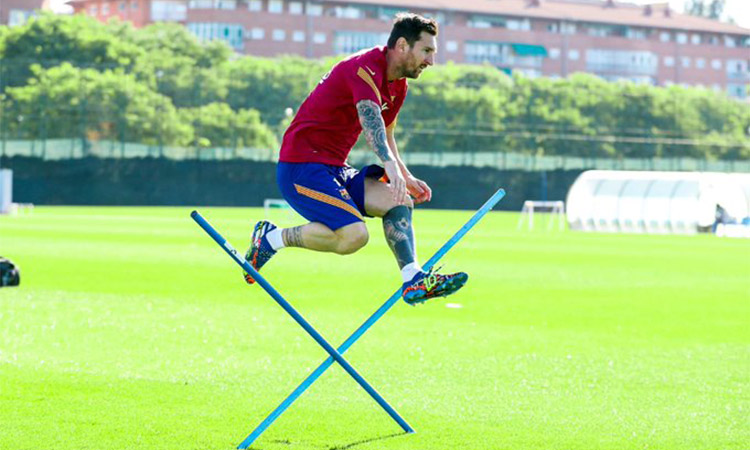 Barcelona’s Lionel Messi takes part in a training session on Friday, ahead of their friendly match against Gimnastic Tarragona. Courtesy: Barcelona Twitter

Barca face Gimnastic Tarragona in a friendly on Saturday and Messi could feature after Koeman said he will field two separate line-ups in each half.

Messi only returned to pre-season training on Monday and has worked on the squad’s days off as he tries to make up for lost time following a chaotic few weeks.

Koeman said last month he only hoped to keep players who wanted to be at the club and he then held a meeting with Messi, in which he reportedly took a hard line with the Argentinian.

But after Messi’s explosive interview with Goal last week, in which he said he had been forced to stay but pledged to give his all for the team, Koeman struck a more conciliatory tone on Friday.

“I have already said it several times that Messi is the best,” said Koeman.

“Messi when he is physically fit is a very important player as he has shown for many years and I hope he can repeat it this year.”

Earlier on Friday, Barcelona’s vice president Pau Vilanova said the club had taken heed of Messi’s criticism after the 33-year-old expressed his frustration with the direction of the team.

It is the first time someone on the Barca board has spoken publicly since Messi declared his position.

“We are very happy that Messi is with us and has joined this exciting project,” said Vilanova on Friday.

After Gimnastic Tarragona, Barcelona play friendlies against Elche and Girona, before starting their La Liga season against Villarreal at the end of the month.  All eyes will be on Messi and whether he has the motivation to reintegrate and find his best form again.

Ansu Fati has suffered a blow in his preparations for the new La Liga season after the forward injured his hip on Friday, Barcelona announced.

“The Spanish international has a bruise on his right hip from training on Friday,” Barca wrote in a statement, without confirming how long they expect the 17-year-old to be out for.

Fati is unlikely though to feature in Barca’s friendly against Gimnastic Tarragaona on Saturday.

“In any profession, we’ve all had doubts about our situation and then, after some reflection, we have decided to continue or to leave,” said Vilanova.

“In this case he will continue and he will be motivated.”

Messi was particularly critical of Barcelona’s president Josep Maria Bartomeu, whom he accused of going back on his word over an agreement to let him leave.

“We hope and wish that there is a respect and togetherness so the club can function,” said Vilanova. “Obviously, there are people from the club who are talking to him.”

Meanwhile, La Liga begins on Saturday without its top teams and still without fans but with hope that an unusual summer could lead to a season of surprises.

Barca, Real Madrid, Atletico Madrid and Sevilla have been granted extra time off, meaning the top four from last term will all be absent on the first weekend, when only seven fixtures are taking place.  Yet more than the heavyweights, who will take to the field later this month, the league will miss the fans, whose absence might be felt even more keenly at the start of a new season than during the desperate attempt to finish the last one.  At Cadiz, who are back in the top flight after 14 years away, the stands at the Carranza would have been bouncing, revelling in a new beginning against Osasuna.

Instead they will be empty, and there will also be silence at the league’s curtain-raiser at Ipurua, where Eibar are continuing their own miracle by embarking on their seventh consecutive year in the top flight, at home to Celta Vigo.

La Liga’s plan had been to stagger the return of supporters through the autumn, building up stadium capacities from, at first, 30 per cent through to full grounds some time in the new year.

But a worrying rise in coronavirus cases in Spain means those plans have been shelved, with the league awaiting better news from the government before taking any steps forward.

“I believe that to see stadiums like before it can only happen with a vaccine,” said La Liga president Javier Tebas on Monday. “I hope it can be in January or February. Several governments have already announced it and that would be the beginning of the end of this bad dream.”

While the pandemic may be beyond their control, La Liga and the Spanish Football Federation have hardly helped an already slow start by creating further chaos over fixtures.

The original opening game between Granada and Athletic Bilbao, scheduled for Friday night, has been moved to Saturday, an announcement made on Wednesday night, 48 hours before the planned kick-off.  It continues a long-running dispute between the organisations over scheduling, which a judge in Madrid is due to settle on October 6.

Yet a stuttering start to the season may lead to something more promising as La Liga’s traditional duopoly of Barcelona and Real Madrid appears open to challenge.

Lionel Messi and Barcelona forged an extraordinary winning combination for more than a decade until cracks in the foundations of the soccer dynasty grew, leading the Argentine great to doubt his future at the club.