Saliva for shining the ball a definite no-no in COVID-19 times, says Zaheer 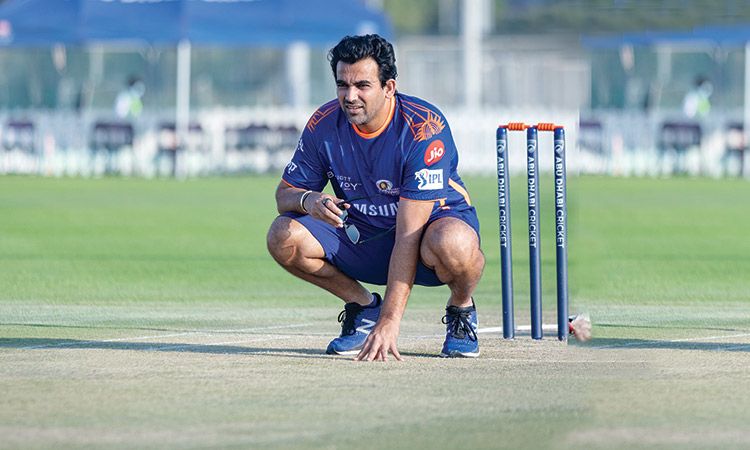 Zaheer Khan takes a look at the pitch during a practice session. Courtesy Twitter

Dubai: Former Indian pace spearhead and director of cricket operations at Mumbai Indians warned the bowlers to refrain from using saliva to shine the ball at the upcoming Indian Premier League (IPL).

“Cricket ball and all that, we have to be a little bit careful of and get used to not using the saliva. Old habits at times creep in as a bowler, so we will have to be mindful of that,” said Zaheer in a video posted on the defending champions’ Twitter handle.

Use of saliva was banned by the ICC after the outbreak of coronavirus in order to keep players safe and sound from the pandemic.

Using saliva to shine the ball in order to get the ball swing has been in practice right from the beginning. The fielding side keep on shining the ball with saliva so that it remains shiny on one side while the other side becomes rough as the game transpires.

The rough side becomes a little heavier with the accumulation of moisture on the ball, which helps in getting the ball to swing.

Commenting on the new normal of staying in a bio-secure bubble and not interacting with outsiders, during the pandemic, he said: “I would not say it is going to be difficult as such. It is just a matter of getting used to new routines.

“When you are professional you have to find a way of keeping that mental space which you like to be in. It varies in individuals. So, that is something that every individual has to take care of and own that space. I feel good to be back out on the field,” added Zaheer.

“His knowledge is massive and I think in our set-up, he is someone who has literally controlled the training aspect,” added the UAE head coach.

All-rounder Balwant Rai said: “He is a very interesting character. It is going to be lot of fun in training with him and we will get to learn a lot as well.

“He makes us train very hard. He does not stop until we are exhausted. He makes sure that our form and posture both are good and only then we go for training.

“Whenever there is any kind of drill, he himself does it first and shows us. He tells us what to do and what not.

“He is training us according to the magnitude of the tournament we are aspiring to play in,” added Rai.

Mumbai bowler Digvijay Deshmukh said: “I had heard from many people that he is very strict and his drills are very tough.

“He is very unrelenting. He does not spare anyone. I was prepared for that. So, I am very happy to be getting the same kind of training which I need,” he added .

Chapman said: “I am very excited and it is great to be here.”

The coronavirus outbreak brought the entire world to a grinding halt. Sports were the worst hit across the globe.

IPL was shifted to the UAE in 2014 also in the wake of general elections, when the then home minister Sushil Kumar Shinde refused to provide security to the players due to the elections. A total of 20 matches were played in the UAE across three venues – Sharjah, Dubai and Abu Dhabi.