Coach Bielsa confirms he is staying at Leeds this season - GulfToday

Coach Bielsa confirms he is staying at Leeds this season 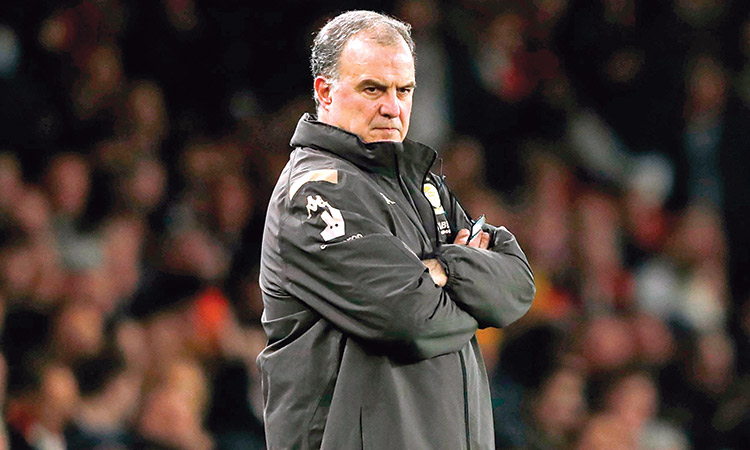 London: Marcelo Bielsa confirmed on Thursday that he was staying with Leeds for their first season back in the Premier League after a 16-year-absence.

The Argentine head coach guided Leeds back to the top flight in July but despite the club saying a new deal was due, an agreement has not been formally announced.

However, speaking to the media ahead of Saturday’s season opener with Liverpool, Bielsa said: “I will be working the next season at Leeds United.”

“Everything has been sorted,” he added. “It’s definite that I will be here next season.”

“They are one of the best teams in the world, with a fine system and very good players,” he said.

“It’s difficult to say how our players are going to adjust to the Premier League. We have prepared for this, but we need to show it on the pitch.”

The Argentine said he would not be changing his team’s style of play following promotion.

“To begin with we will try to play the same way,” he added.

Meanwhile, “If I have to cut a finger of mine to win tomorrow’s derby, I will,” he told his players. “I still have four left.”

Bielsa made that statement in 1990, in his first year as a coach, to rouse the passion of his players at Newell’s Old Boys before a trip to archrival Rosario Central.

His team won the Argentine league match 4-3, even without Bielsa having to lose a finger. But it was an early example of the motivational methods of a coach who was already then known as “El Loco” for his obsessive personality and explosive character.

Now, 30 years after starting his coaching career at the Rosario-based club, Bielsa is about to become the latest high-profile - and colorful - manager to tackle the Premier League.

Bielsa led Leeds back to England’s top division after a 16-year absence, and the team will face Jurgen Klopp-led Liverpool at Anfield on Sunday in the season opener against the defending champions.

For the 65-year-old Bielsa, it’s the latest highlight in a journey that started in Rosario and has also taken him to clubs in Mexico, Spain, France and Italy - along with the national teams of Argentina and Chile.

And perhaps an unexpected career for someone who comes from a family of notable lawyers. Bielsa’s grandfather, Rafael, was a prominent local professor and the author of several law books. But a young Marcelo broke with family tradition and opted for soccer, joining the Newell’s Old Boys academy instead - the same place where Lionel Messi would later get his start.