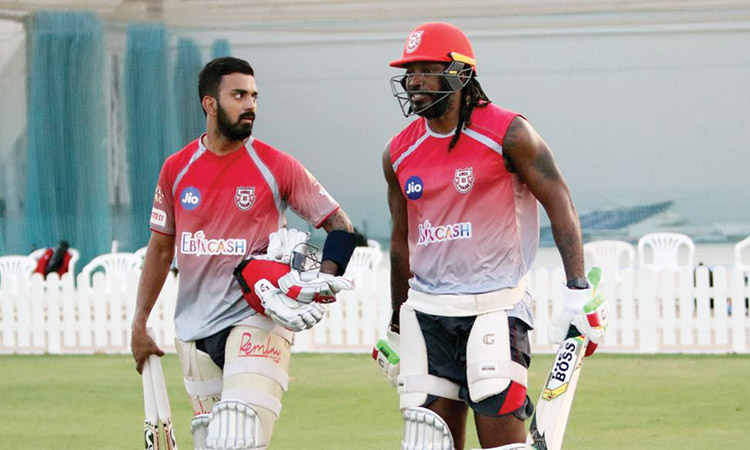 Two seasoned ‘Bangalore Boys’, with the help of at least four languages as mode of communication, will plot Kings XI Punjab’s strategy for achieving Indian Premier League (IPL) glory, even if their age difference is 22 years. Head coach Anil Kumble and captain KL Rahul have much in common than their mother tongue, Kannada -- the goal of receiving the trophy on Nov.10 in their 13th attempt.

Apart from Kannada that Kumble and Rahul speak when together — English and Hindi is spoken when the team is around — the studious but strict head coach revealed that he was learning accented Punjabi to keep the group entertained. Here, the big age difference between Kumble, who turns 50 on Oct.17, and Rahul, 28, would be just a number as they work towards the common cause.

Kumble admitted that having known Rahul would be an advantage. “Familiarity helps. But the (known) language is only a (part of) communication. I also try and put on a Punjabi accent with Punjabi boys and try and keep them entertained with the little Punjabi that I can speak. Of course, when we are only a couple of us we will speak Kannada, but within a group it will be a common language, which is Hindi or English,” Kumble told a select group of Indian journalists during an interaction on Tuesday.

“Language is just a mode of communication. Knowing the players well, not just KL but others as well, over a period of time really helps,” said the legendary Kumble, who is designated as Director of Cricket Operations and has represented Royal Challengers Bangalore as a player.

Kumble pointed out the advantage of having Rahul with KXIP for a couple of seasons. “Of course, knowing KL and other players from the past helps understand each other really well. I have seen KL from a very young age as a player. This will be his first major (captaincy stint) - he’s captained at a junior level, but not in a high profile game. So, far he has been brilliant,” he said.

“He knows the players better than me because he has been with the franchise for last two years. He has played with most of the players really well. And he is very relaxed. He understands all the nuances of what it takes to be a leader. I’m looking forward to the IPL under his leadership.”

Kumble said he would like big-hitting batsman Chris Gayle to be more active as part of the leadership group. “Chris has a major role as a player and even otherwise, in a leadership role in terms of his contribution to develop younger players. He does that, but I want him to be more active in that role. Everybody looks up to him. He’s a great guy to have in the team. I’ve worked with Chris in the past. Not just Chris, but to choose from the other 17 (foreigners) will be a challenge; a good headache to have. All 25 will be up for selection,” he announced, apparently to keep all the players interested.

Kumble also pointed out that the vast experienced of the team’s support staff. “We have a very good support team as well. It has a wealth of experience and knowledge both at the IPL and international level,” he said.

The coaching staff includes former Zimbabwe batting mainstay Andy Flower as assistant coach, Indian domestic giant Wasim Jaffer as batting coach, legendary South African Jonty Rhodes, and Charl Langeveldt, another South African, as bowling coach. The support staff, too, is vastly experienced and it includes the likes of physio Andrew Leipus and strength and conditioning coach Adrian Le Roux. Both have been associated with the Indian team as well.

Kumble is the lone Indian head coach amongst the eight franchises in this IPL. He is, however, optimistic that more Indians would be involved in the leadership roles in future. “Obviously, I would like to see more Indian coaches in the IPL. I don’t think it gives the true reflection of the quality or the availability of Indian resources. It’s a bit of irony to be the only Indian as the head coach. I am hopeful in some time there’ll be more Indian coaches,” said Kumble.

Workload management will be  key for pacers in hot UAE, feels Shami: Keeping in mind the hot and humid conditions in the UAE, it will be vital for fast bowlers to manage their workload properly as the task at hand wouldn’t be easy when the IPL gets underway on Sept.19, feels Kings XI Punjab pacer Mohammad Shami.

Three emirates including Dubai, Abu Dhabi and Sharjah   -which will host the league - are expected to experience temperatures of around 35-40 degree celsius during the tournament.

“Temperature is much higher compared to India. There are chances of getting dehydrated. There will be chances of cramps. So we will have to keep those things in mind,” Shami said in an interview from Dubai on Tuesday.

“It will be difficult as the wickets here are also different. So workload management is important. But it is not that difficult that it can’t be managed. It depends on us how we manage our workload,” added the 30-year-old, rated as one of the best pacers in the World at the moment.

“It felt great getting out of home and coming to Dubai. We are all grateful to play the game which we all love. So the feeling cannot be compared. The best part is that everyone is on the field and training. In India, IPL should bring smiles to the faces of all,” he said.