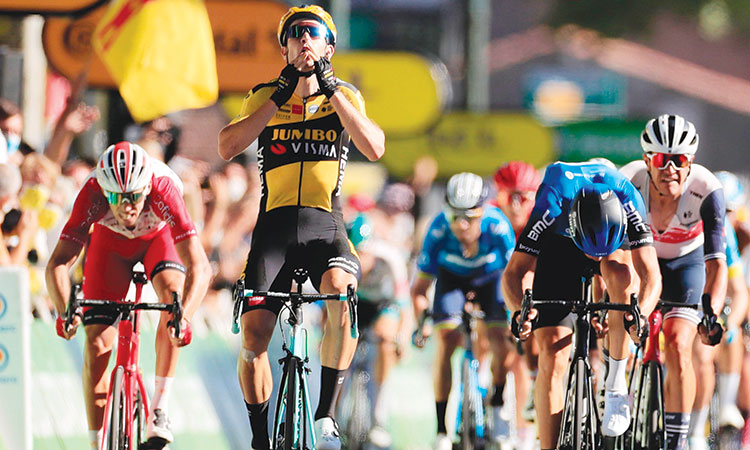 Wout van Aert picked up a second win of the 2020 Tour de France on Friday as aggressive tactics and crosswinds combined to produce an enthralling race that claimed several victims.

The unflappable Yates said he had been expecting an easy day, on what was billed as a straightforward flat run through France’s rugby club heartland round Albi, ahead of two monster Pyrenean stages.

The plot unfolded from 150km as Bora launched an unexpected assault, cranking up the pace with attacks which succeeded in exploiting the crosswinds, splitting the pack and shedding Sagan’s rivals in the points classification, Irishman Sam Bennett who started the day in green, and Australian Caleb Ewan.

“Our director was against the idea at first, but we did this once in 2013 and it worked, I won,” said Sagan, who only came 13th after his bike lost its chain at the critical moment in the sprint.

“I’m going back to my bus to relax and focus on the mountains,” he said.

“All the sprinters were dropped already and afterwards it was totally hectic,” said the Jumbo rider at the finish line.

“It was a good day for the team as some favourites from the GC lost time too,” said Van Aert, whose team leader Slovenian Primoz Roglic is the Tour favourite.

“I got a slipstream, found a gap and timed my sprint perfectly,” said Van Aert. “But this is more of a surprise than the last win.”

The stage embarked within sight of the 336m-high Millau viaduct that reaches across the Tarn Gorge, where winds also hit the Tour in 2019.

“Everyone expected a quiet day before the mountain but Bora had their ideas. It was very hard from start to finish,” said Yates. “It means that the next two days will be harder.”

Saturday’s run from Cazeres-Sur-Garonne to Loudenvielle features two category one mountains and one beyond-category climb, but both the weekend races end with dangerous descents.

“They’ll be going for it,” Yates predicted when asked if he feared attacks.

“I need to get on my computer and do a bit of recon, but I don’t mind racing downhill, especially on those big Pyrenean roads.”