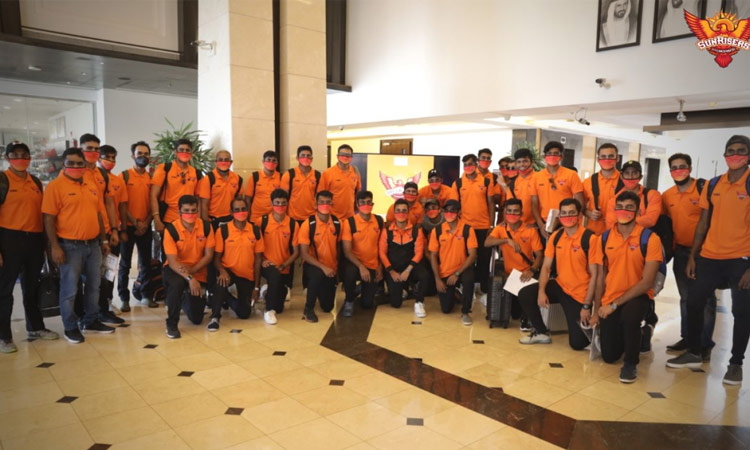 Sunrisers Hyderabad players pose for a picture after their arrival in Dubai on Sunday. Coutsey Twitter

The last batch of the Indian Premier League (IPL) teams, consisting of Delhi Capitals and Sunrisers Hyderabad touched down on the shores of the UAE on Sunday.

The IPL teams started arriving in the country since Thursday and the Rajasthan Royals were the first to herald their arrival for the mega event by sharing their pictures and videos across all the social media platforms like Twitter and Instagram.

All the players and the supporting staff of the IPL teams will have to undergo a mandatory quarantine period of six days before hitting the ground for training sessions.

The IPL-13 was shifted to the UAE in the wake of the rising cases of coronavirus in India. The COVID-19 cases in India have reached three-million mark.

All the teams are sharing their videos and pictures on the social media as they have to complete a quarantine period. Even after serving the quarantine, they will practice in a bio-secure bubble.

Delhi Capitals have never won the IPL title since the inception of the tournament. But this time around look more than confident.

“Finally we are travelling and looking forward to getting to Dubai and serving the mandatory period of one week. We will be undergoing three more tests, and hopefully everyone’s reports comes negative, and then we can get back on to the field to start practicing,” said Mohammad Kaif, assistant coach of Delhi Capitals, ahead of their departure on Sunday.

Kaif was a middle-order batsman and played 125 ODIs and 13 Test matches. He was best known for his exploits in the final of the Natwest Trophy, when he pulled off an unlikely victory along with Yuvraj Singh from the jaws of defeat. He was one of the best fielders of his time.

Capitals CEO Dhiraj Malhotra said, “We are all really excited that cricket is back, and that the team is together again. It is like meeting your own family, meeting your long lost friends. So it is just a really overwhelming phase for all of us.”

Meanwhile, Hyderabad players also urged their fans to support the team through their official Twitter account ahead of the departure.

“We have been waiting for this moment for five months. And finally it is going to happen, said Samad.”

Samad is right-handed batsmen and an off-break bowler, who plays for Jammu and Kashmir. He made his way into the team after an impressive domestic season.

“Finally IPL is happening and it is a great news for cricket fans around the world. I am very happy as it is my debut season at the IPL,” added Samad, who is set to make his IPL debut with Hyderabad this year.

“Unfortunately, it is not happening in India but you guys can still watch it on TV. The most important thing is that keep supporting us and remember us in your prayers,” he urged

Hyderabad’s pacer Bhuvneshwar Kumar said: “I am very excited but I am sure this edition id going to be different from the rest of the seasons.

“As you know, we have been at home for last five months, so we are looking forward to it. There are both positive and negative to it.

“The positive thing was that we got to spend more time with family but the negative part was that we were away from cricket for a long time,” he added.

“Hyderabad fans have been supporting us for a long time and we urge them to keep supporting us so that we can return with the trophy. I am sure we will make our fans proud winning the title,” he said ahead of their departure.

Hyderabad won the IPL title in 2016. In the second edition of the tourney in 2009, an Adam Gilchrist-led Deccan Chargers had won the title.