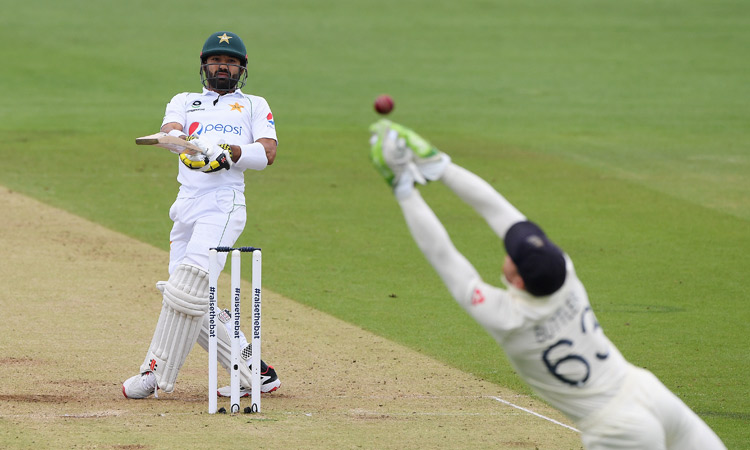 Jos Buttler dives as he attempts to make a catch to dismiss Mohammad Rizwan off the bowling of Stuart Broad on Friday. Reuters

Mohammad Rizwan was left frustrated when having shone for Pakistan with a fine unbeaten fifty in the second Test against England at Southampton on Friday, he was forced to leave the field for bad light. 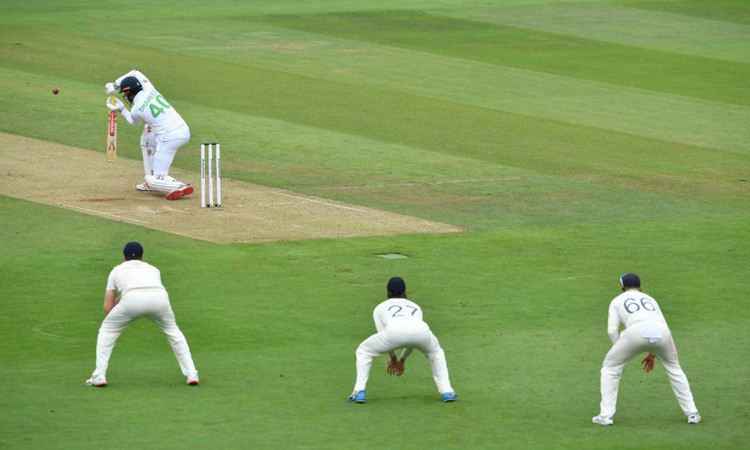 Even though the Ageas Bowl floodlights were on, the umpires took the players off the field 10 minutes after tea with bad weather, as it did on Thursday, causing several interruptions.

This was the latest example of bad light stopping play in a Test even when floodlights are in use.

Whereas batsmen could once stay on even if 'offered' the light by the umpires, since 2010 the match officials alone decide to halt a Test should they deem the conditions too dark.

"I was ready to play but the decision rests with the umpires, and they have the responsibility to ensure no one gets injured," Rizwan told reporters after marking Pakistan's Independence Day with a second fifty in eight career Tests following his 95 against Australia in Brisbane in November.

"They have to go by the light meter. It's the same for both teams," added the wicketkeeper, who impressed behind the stumps during Pakistan's three-wicket defeat in last week's first Test at Old Trafford.

Pakistan were in danger of being dismissed for under 200 at 176-8. But Mohammad Abbas gave Rizwan staunch support with two off 20 balls during a stand of 39 before he was lbw to Stuart Broad. 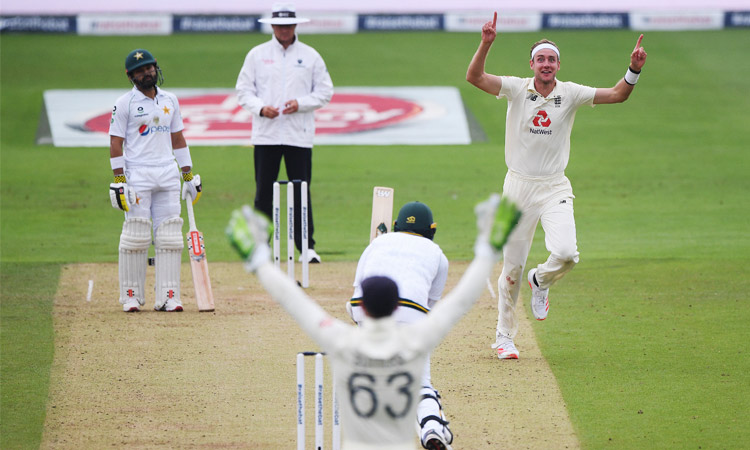 Fortunately for the umpires, in a series being played behind closed doors because of the coronavirus, there were no angry spectators present when they decided it was unsafe to continue.

"We're a little bit frustrated we didn't get a chance to finish them off," said England great James Anderson, whose return of 3-48 left him just seven shy of becoming the first paceman to take 600 wickets in Tests.

"The light has been gloomy all day but it's one of those when it didn't seem like the batsmen were struggling too much."

Anderson was sceptical about using a different coloured ball to keep Test-match play going under floodlights, suggesting instead that officials be given a "bit more leeway" in their use of light meters.

'Right to go off'

"It's a tricky one because player safety is very important," said Broad after a return of 3-56 in 25 overs saw him become the seventh England bowler to take three wickets in seven consecutive Test innings.

"As bowlers you're keen to bowl all the time," especially in conditions like today.

"The officials were right to bring us off...all of our fielders were saying we wouldn't want to bat in this, this is quite dark," he added. 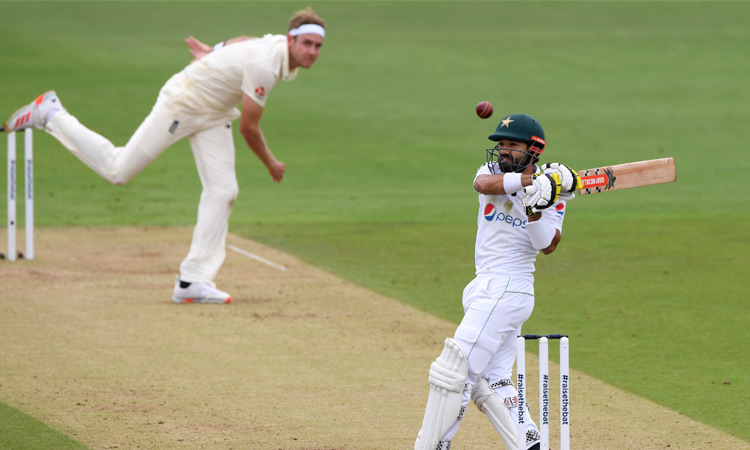 Stuart Broad bowls to Mohammad Rizwan during the second day of the second Test match. AP

In overcast conditions ideally suited to England's four-man pace attack, Pakistan creditably did not lose a wicket in the hour's play that was possible in a morning session curtailed by rain to be 155-5 at lunch.

Babar Azam, in for nearly two-and-a-half hours, was eventually undone for 47 when he edged a fine Broad delivery that moved late to wicketkeeper Jos Buttler.

But Buttler could not hold a difficult legside chance when Rizwan, on 14, miscued a hook off Broad.

Pakistan were, though 176-8 when Shaheen Afridi was run out without scoring by Dom Sibley.

Rizwan, however, cleverly uppercut left-arm paceman Sam Curran over the slips for four before driving Chris Woakes through extra-cover for another boundary.

Victory in this match would put England 2-0 up in a three-match campaign and see them to their first series win over Pakistan since 2010.