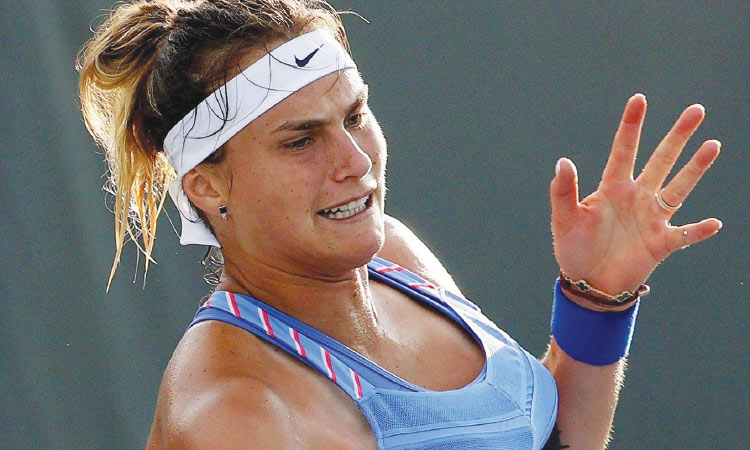 Third seed Konta requested medical attention just a few minutes into her 6-4, 6-4 first round loss to the unseeded Bouzkova.

The 29-year-old Briton looked uncomfortable and kept holding two fingers to her neck to check her pulse before eventually resuming play.

Konta later explained that she is prone to sudden palpitations that can send her heart rate soaring.

“My heart rate shoots up for no reason, we didn’t have a long point, I wasn’t gassing in any way in my lungs,” Konta said.

“It makes me a bit lightheaded, I just had to see the doctor and the physio.

“I was having all the checks. I am as fit as a fiddle but it can happen. It took a while to settle down until about 4-3 in the first set, but then it did settle down and I was able to concentrate on the tennis.”

Konta said it was the fourth time she had been affected by the problem during tournament play or practice.

“We don’t know why it happens, it’s in stressful situations, in non-stressful situations. It’s been sporadic and we haven’t been able to capture it. I get very lightheaded and I can’t function for the first few seconds,” she said.

“I am worried. It’s not ideal. I am going to have another EKG (electrocardiography) test, and hopefully measure it. But probably now it won’t happen again for another year or something.”

Konta, the world number 15, was the highest profile casualty on Monday in the opening round of the inaugural WTA event in Kentucky.

Other seeded players in action made it safely into the second round, with Polish sixth seed Magda Linette beating the United States’ Lauren Davis 6-2, 6-2, and Tunisia’s Ons Jabeur, seeded eight, downing another American, Caty McNally, 6-2, 6-4.

This week’s event is the first WTA tournament to be held in the United States following a five-month hiatus caused by the coronavirus pandemic.

Meanwhile, Simona Halep won her opening match of the WTA Prague Open on Tuesday, defeating Polona Hercog 6-1, 1-6, 7-6 (7/3) to relaunch a season disrupted for nearly six months by the coronavirus pandemic.

Top seed Halep needed two and a half hours to overcome Slovenian world number 46 Hercog on clay in the Czech capital, blowing six match points in the decider before prevailing in a tie-break.

The second-ranked Halep will meet Barbora Krejcikova in the round of 16.

The reigning Wimbledon and former French Open champion was appearing in her first match on tour since securing her 20th career title at the Dubai Championships in February.

She pulled out of the first post-lockdown WTA tournament in Palermo last week over virus concerns, and is yet to make a final decision whether to play at the US Open later this month.

The tournament in Prague is Halep’s first trip abroad since February, having spent the lockdown in her native Romania.

Organisers of the Czech event have put all players and staff in a single eight-storey hotel reserved for the occasion to reduce the risk of COVID-19 contagion.

Regular temperature checks are a must, just like face masks which the players have to wear unless they are playing, training or eating.