Heikal delighted to be back in national team - GulfToday 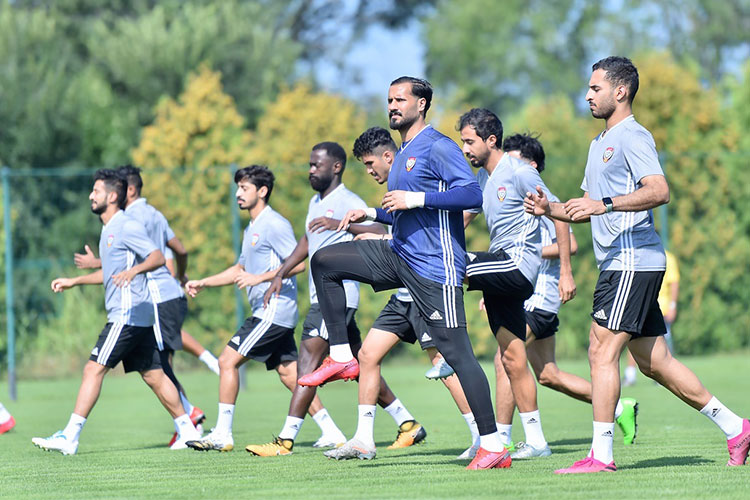 UAE players attend a training session during an overseas camp in Belgrade, Serbia.

The UAE national team is going through what can be rightly called a baptism by fire as they are battling harsh weather conditions during a gruelling training camp in preparation for the joint qualifiers for the 2022 World Cup and the 2023 AFC Asian Cup finals.

Recently a training session was carried out under heavy downpour, but that did not deter the players from performing their chorus with all seriousness, which shows their desire to excel and execute the time in the best possible way come out of it with maximum benefit.

Pinto, who replaced Serbian Jovan Ivanovic, has been entrusted with the job of reviving the faltering camping of the UAE at the 2022 FIFA World Cup and 2023 Asian Cup qualifiers.

UAE are in the fourth place in their group and need to win all their remaining four matches to advance to the next round and keep their slim hopes alive. After taking over the reins of the UAE team, the first thing that Pinto did was to curtail the squad from 36 to 28. He recalled Abdulaziz Heikal, the right-back of the UAE national team and Shabab Al Ahli Club, in his list of probables. Heikal expressed his delight on his return to the national team after a long lay-off.

He also vowed to give his best to cement his place in the squad. “I promise to cooperate with my team-mates during the matches in a bid to achieve our goal of reaching the next round of the qualifiers and make up for the past losses,” said Heikal.

UAE will take on Malaysia on Oct.8 before travelling to Indonesia five days later. They play their last two qualifiers against Thailand and Vietnam on Nov. 12 and 17 respectively on home turf as per the revised schedule after the coronavirus forced months of inactivity across the globe.

Vietnam with 11 points are leading the group followed by Malaysia in second with nine points, Thailand in third with eight and UAE in the fourth spot with six. Heikal also confirmed that the atmosphere of the Serbian camp is very positive and lively.

All his team-mates are committed to the guidelines that have been laid down by the technical staff and they perform their daily chorus with high morale.

“Although we performed remote training during the lockdown, the group exercises are completely different. We faced some challenges during the first few days of the team gathering, which were compounded by the high temperature and humidity.

“But with the help and the cooperation of the technical and medical staff, we have been able to overcome these challenges,” added Heikal Meanwhile, the goalkeepers’ coach of the UAE team, Eduardo Nino, was full of praise for the standard of the national team goalkeepers Khalid Essa, Ali Khusaif, Mohammed Al Shamsi and Khalid Al Senani, saying that these goalkeepers possess high technical capabilities, strong physical structure and quick reflexes.

Nino said that he feels happy during the training sessions due to a healthy competition among the four goalkeepers, who are performing their exercises perfectly, which reassures him that the nets will be in safe hands. 