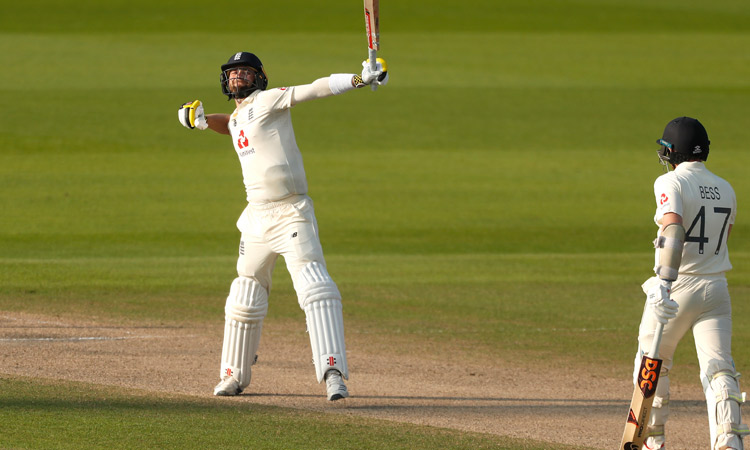 Chris Woakes celebrates their win on the fourth day of the first cricket Test match at Old Trafford on Saturday. AP

Chris Woakes hit an unbeaten 84 as England came from behind to beat Pakistan by three wickets in the first Test at Old Trafford on Saturday.

England were struggling in pursuit of a victory target of 277 after collapsing to 117-5 on the fourth day.

But man-of-the-match Woakes, who had helped drag England back into this contest with 2-11 in just five overs late on Friday, and fellow World Cup winner Jos Buttler turned the tide with a stand of 139.

"It was a brilliant chase," said England captain Joe Root at the presentation ceremony. "I couldn't be more proud of the lads.

"That partnership with Woakesy and Jos was magnificent.

"One thing you can never doubt in our dressing room is the character. I am really proud and pleased that has shone through today." 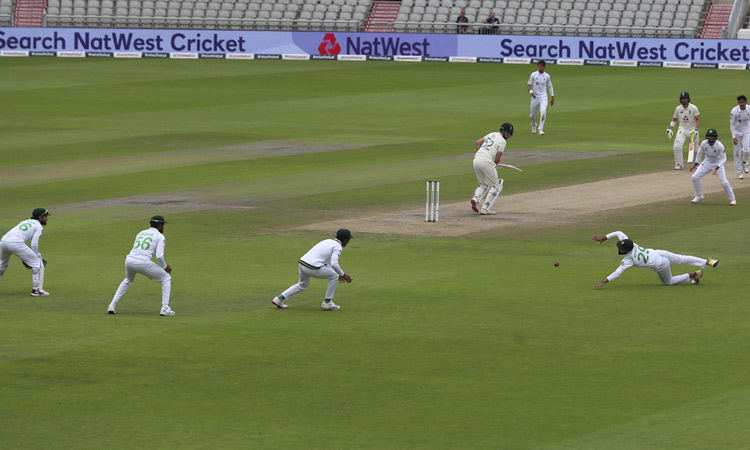 Dom Sibley plays a shot for a boundary during the fourth day of the first Test. AP

But there was still time for England to lose their seventh wicket when, with four more needed, Stuart Broad was plumb lbw on the sweep to Yasir.

Woakes, however, finished the match with an edged boundary off Afridi as England went 1-0 up in a three-match campaign.

Victory meant England had won an opening Test for the first time in six series. 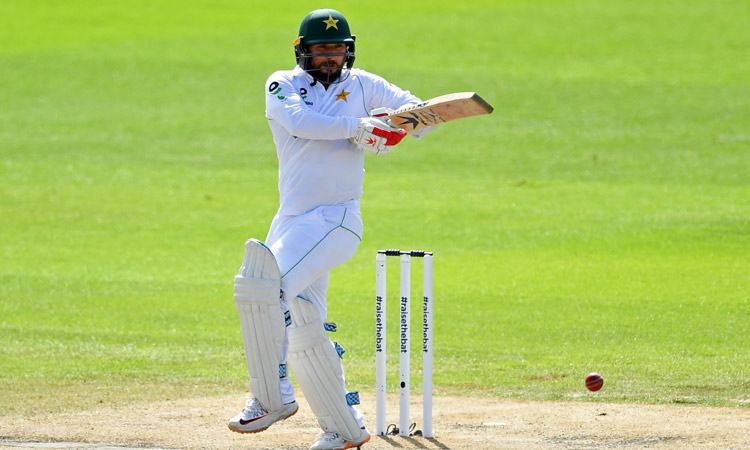 Yasir Shah plays a shot during play on the fourth day of the first Test. AFP

Defeat was tough on Yasir, who took eight wickets in the match. Wicketkeeper Buttler had a poor game in the field, twice missing Shan Masood on 45 during the Pakistan opener's 156 that was instrumental in leaving England with a first-innings deficit of over a hundred runs.

"I know it's not good enough as an international wicketkeeper...If I am going to continue to be a wicketkeeper in this team, I'm going to have to be better," he admitted.

But Buttler, who led England to a stunning one-wicket win over Australia with an unbeaten century in a one-day international on this ground two years ago, put the pressure back on Pakistan with the bat.

Buttler, whose father was admitted to hospital Friday but has since been released, told Sky Sports: "We (England) turned up today still with a lot of belief." 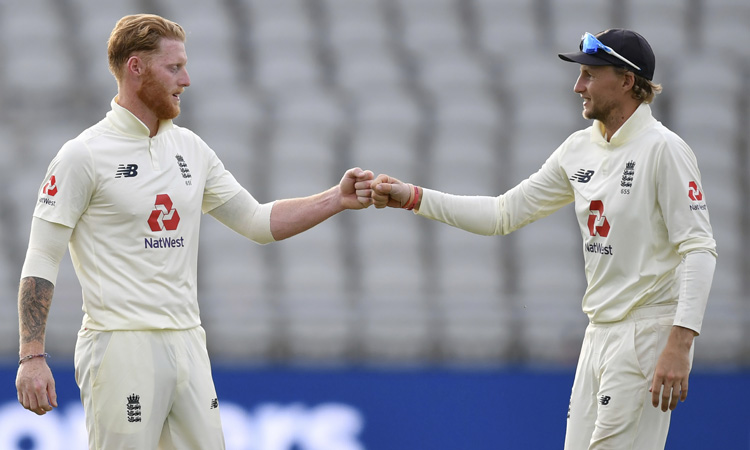 Joe Root (R) fist bumps with teammate Ben Stokes at the end of the third day of the first Test match. AP

Pakistan captain Azhar Ali praised Buttler and Woakes by saying: "They changed the momentum of the game and unfortunately we couldn't reply to whatever they threw at us."

Buttler's fifty came off just 55 balls, with seven fours, with Woakes no slouch in a 59-ball fifty he completed by cover-driving Naseem Shah for the eighth boundary of his innings.

It was Woakes's highest Test score since his hundred against India two years ago.

Although Woakes is known to be vulnerable to the short ball, Pakistan did not pitch short to the all-rounder until he was well set.

Earlier, England lost four wickets for 31 runs in slipping to 117-5, with Root and Ben Stokes both falling in the collapse.

Root made 42 before he nicked Naseem to Babar Azam in the slips. Stokes had guided England to an astounding one-wicket win over Australia from a seemingly hopeless position with a brilliant century in the third Ashes Test last year.

But there was no repeat of his Headingley heroics on Saturday when he fell for just nine, with wicketkeeper Mohammad Rizwan holding an excellent catch after Stokes got a thin glove to a Yasir googly that bounced. Pakistan resumed on 137-8, a lead of 244.

Yasir struck a quickfire 33, with Pakistan adding 32 in 16 balls Saturday before they were dismissed for 169 in their second innings.

England will now try to complete their first series win over Pakistan in 10 years with victory in the second Test at Southampton starting on Thursday.