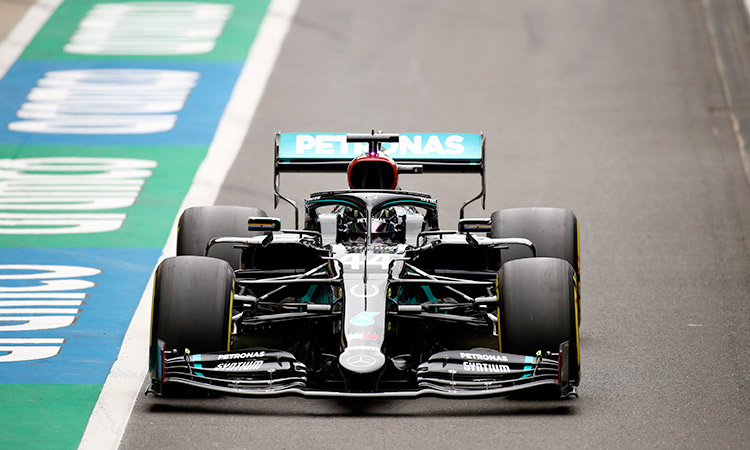 Mercedes driver Lewis Hamilton steers his car during the second practice session of the 70th Anniversary Formula One Grand Prix at the Silverstone circuit on Friday. Associated Press

The championship leader and six times champion had been second behind the Finn in the opening morning session at Silverstone, but was fastest in torrid heat and temperatures of 36 Celsius.

Hamilton won last Sunday’s British Grand Prix at the same circuit from pole position and despite a last lap puncture.

With 87 career wins, the Briton is closing in fast on Ferrari great Michael Schumacher’s all-time record of 91 set between 1992 and 2006.

Daniel Ricciardo was third for Renault, eight-tenths off the pace set by Hamilton with his best lap of one minute and 25.606 seconds, enough to lift him one-tenth clear of Bottas.

The two had traded fastest laps during the session, which ended early with two minutes remaining when Antonio Giovinazzi was left stranded with his Alfa Romeo at Becketts after Sebastian Vettel had suffered an engine failure in his Ferrari at Copse.

The session was red-flagged and not re-started.

Max Verstappen was fourth for Red Bull ahead of the Racing Point pairing of Lance Stroll and Nico Hulkenberg, the Canadian edging ahead of the stand-in German driver, who was replacing coronavirus victim Sergio Perez.

The Mexican had returned a positive result from a Covid-19 test overnight Thursday and missed a second successive race, allowing Hulkenberg to impress again in the controversial ‘pink Mercedes’.

Meanwhile, the Racing Point Formula One team were docked 15 points on Friday after a complaint by rivals Renault, who claimed parts of their 2020 car were copied from Mercedes’ title-winning 2019 machine, was upheld.

The sport’s ruling body the International Motoring Federation (FIA) said Racing Point had been reprimanded for continuing to use their ‘illegal’ cars, dubbed the “pink Mercedes”, at the Hungarian and British Grands Prix.

The FIA stewards’ verdict pointed out that while the matter -- in particular a protest at the validity of the brake ducts of the Racing Point cars -- was essentially technical, the team had been in breach of the sporting and not the technical regulations and thus escaped a disqualification.

The outcome resulted in Renault moving up to fifth place in the teams’ standing on 32 points and Racing Point dropping to sixth on 27 ahead of this weekend’s 70th Anniversary Grand Prix.

Racing Point, owned by Canadian billionaire Lawrence Stroll, has the right to appeal.

No penalties were imposed on the team’s regular drivers, the Mexican Sergio Perez and Lance Stroll, the son of the team’s owner.

Perez is out of Sunday’s race after testing positive again for coronavirus, meaning he misses a second consecutive race.

He will replaced by German driver Nico Hulkenberg, as he was for last week’s British Grand Prix.

Renault’s case centred on the design of Racing Point’s brake ducts, which it alleged are copies of those Mercedes used on its world championship-winning 2019 car.

The points sanction and the fines were applied in response to Renault’s original protest following the season-opening Austrian Grand Prix where the Silverstone-based Racing Point team revealed impressive speed.

The stewards required more than three weeks to consider the complexities of the case. The key issue was the brake ducts used by Racing Point, which Renault claimed were designed by Mercedes.

In 2019, brake ducts were “listed parts” which teams could legally purchase from rivals, but this changed for 2020 when they were moved to become “non-listed parts” - forcing all teams to design their own brake ducts.