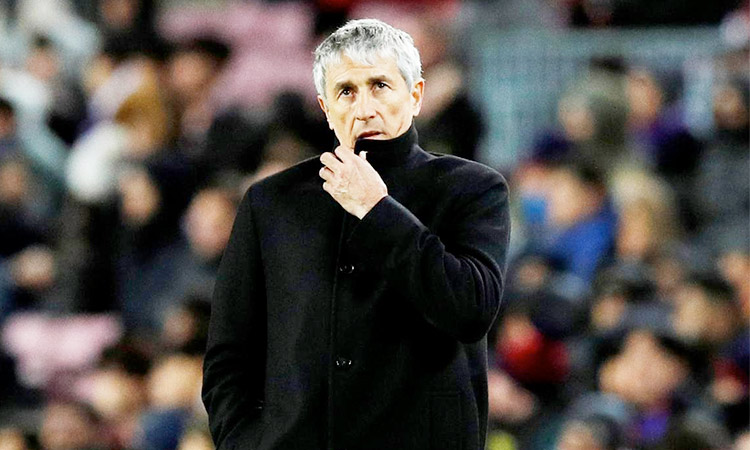 Barcelona coach Quique Setien is likely to lose his job if they go out against Napoli or get humiliated by Bayern Munich. Reuters

Few expect an easy passage into the quarter-finals and if they get there, even fewer expect them to survive against Bayern Munich, the tournament’s most convincing team so far.

With the advantage of an away goal from the 1-1 draw in Italy in February, Barca would usually feel confident against a side that just finished seventh in Serie A, and at the Camp Nou, where they have suffered only one defeat in 58 Champions League games.

But after a miserable end to La Liga, that flipped a two-point lead over Real Madrid into a five-point deficit, Barcelona resume their European tilt as outsiders, behind Bayern, Juventus, perhaps Atletico Madrid given their favourable draw.

“The fans are running out of patience because we’re not giving them anything,” said Lionel Messi as Barca’s title chase unravelled. “If we want to fight for the Champions League, a lot has to change because like this, we will lose to Napoli as well.”

The hope might be Barcelona can turn pessimism to their advantage, if the result is a team free of tension, able to view the Champions League as a fresh start after a failed campaign in Spain.

When they capitulated against Roma and Liverpool, Barca’s players talked about crumbling under pressure, a weakness that has been exposed all too many times since.

“They were strong and from a psychological point of view they fed off our fragility,” said then-coach Ernesto Valverde after the Liverpool loss. “They came at us and we failed to react,” said Sergio Busquets of Roma.

The obsession with winning the Champions League and ending what is now a four-year drought both for the club and, crucially, Messi, has been all-consuming.

Domestic success has been shrugged off, with results in Europe proving definitive regardless of what happens elsewhere.

Yet nobody ranks Barcelona among the favourites this time around. The players might feel they have little to lose, even if current coach Quique Setien is likely to lose his job if they go out against Napoli or get humiliated by Bayern.

Not all bad? : There are caveats to the chaos too. Despite only seven wins from 11 games after the restart, Barca were impressive in spells and most effective against bolder opponents, the like of which they are more likely to meet in Europe.

“You can’t tell me it’s all been a disaster, it hasn’t,” said a defiant Setien last month.

They also have Messi, who comes in on the back of three weeks rest, and alongside him, Luis Suarez and Antoine Griezmann, an attacking trio that should be the envy of every team left in the competition.

And yet still the sense is of a team relying on the intangibles: Moments of individual genius, momentum in a knock-out tournament, liberation from the burdens of expectation.

“We have to be more consistent, more reliable,” said Setien last month. “If we manage to have a game like the one we played against Villarreal, where everything went well, it will undoubtedly give us a chance to win the Champions League.”

In this format, with only four one-off matches to win, there is perhaps no better year to be clinging to the hope of the unpredictable.

But for a club like Barcelona, it feels a little desperate, a final shot in the dark at the end of a long and turbulent year. There should be something more.