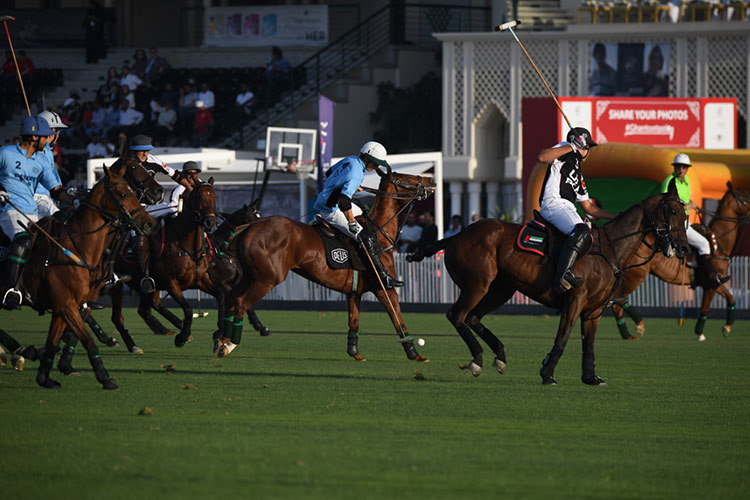 Players seen in action during the last season. File

Ghantoot Racing and Polo Club — the UAE’s only Royal Club equipped with world-class polo and equestrian facilities and recognised as one of the most prestigious clubs of its kind in the world — will open its doors for an exciting new season on Nov.6.

The traditional season-opener, the Pink Polo Day, will set the ball rolling for many local and international championships which will be held from Nov.6 to March 26, 2021.

The 11th edition of the Pink Polo Day, an annual charity event dedicated to raising awareness about breast cancer, is the first event on the schedule, while HH President of the UAE Polo Cup will bring the curtains down on the club’s 2020-2021 calendar.

The fixtures list has been approved by His Highness Sheikh Falah Bin Zayed Al Nahyan, Chairman of Ghantoot Racing and Polo Club, following recommendations of the board members. 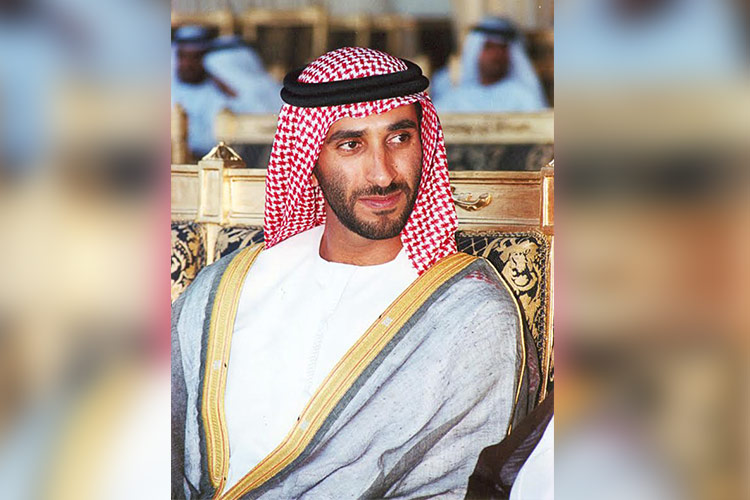 Zaabi commenced the meeting after conveying the greetings of His Highness Sheikh Falah, and it was followed by discussions between the board members and the club teams about plans for the new season.

Zaabi thanked the team for its great support in the previous period and hoped to have yet another distinguished polo season in the UAE.

This year marks the 26th year of Ghantoot Racing and Polo Club, since it was established by late Sheikh Zayed Bin Sultan Al Nahyan in 1994. 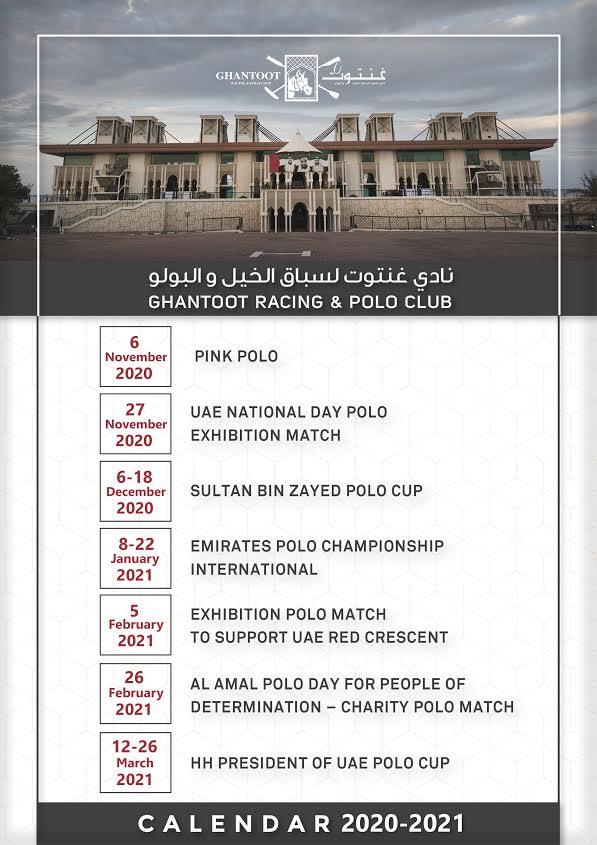 Built around the vision of Sheikh Zayed, the Ghantoot Racing and Polo Club is currently being run under the patronage of his son, His Highness Sheikh Falah.

Set on 300 hectares of perfectly-manicured grassland, Ghantoot Racing and Polo Club offers an oasis of calm and tranquillity amid the hustle and bustle of desert life.

Widely regarded as one of the most prestigious polo clubs in the Middle East, the club has pledged to keep all the precautionary measures in place as per the regulations laid down by the UAE government to maintain public safety amid the coronavirus pandemic.

After the Pink Polo Day, the club will host an exhibition match on Nov.27 to celebrate the 49th annual UAE National Day.

Next event on the club’s calendar will be the second edition of the Sultan Bin Zayed Polo Cup, with a medium Handicap level (10 – 12 Handicap), and it will take place between Dec.6 to Dec.18, 2020.

The 20th edition of the Emirates Polo Championship International, meanwhile, will be held between Jan.8 to Jan.21, 2021.

The Emirates Polo Championship International is considered one of the finest polo tournaments in the UAE and it has witnessed participation of distinguished professional polo teams and players over the years.

On Feb.5, 2021, Ghantoot Racing and Polo Club under the gracious patronage of Sheikh Falah will organise a charity polo event to support the UAE Red Crescent (for orphans) in its fifth edition, which the club is keen to organise annually as a local initiative dedicated for donating to UAE Red Crescent.

The event will be followed by a charity event called Al Amal Polo Day for People of Determination, which will take place on Feb.26 with a fun- filled day for children with special needs and a polo game.

Proceeds from the event will be donated to support centres for people of determination.

The biggest highlight of the new season will be the 21st edition of the HH President of the UAE Polo Cup, which takes place from March 12 to March 26, 2021.

With valuable prizes at stake and top polo players from across the globe taking part, the HH President of the UAE Polo Cup will be a wonderful opportunity for family and fans to enjoy watching the high-tech polo skills in the country.

The tournament is also known as the most prestigious tournaments in the country and the region.

Mansoori, Vice-Chairman of the club’s board, praised the support of His Highness Sheikh Falah which has contributed to achieving many sports and social successes during the last season and has resulted in a positive impact and response of many segments of society through these polo sporting events, that has been successfully implemented in cooperation with all parties especially the governing partner Abu Dhabi Sports Council.

Zaabi, Executive Director of Ghantoot Racing and Polo Club, expressed his recognition and appreciation to His Highness Sheikh Falah and all the board members for their unlimited guidance and support, including the great efforts that have been made which resulted in the success of the previous polo season.

“We are also pleased to announce that the club is set and ready to launch the polo season of 2020-2021, celebrating twenty-six years of bringing the best of polo to the region since the establishment of the club on the hands of the late president Sheikh Zayed Bin Sultan Al Nahyan,” Zaabi added.