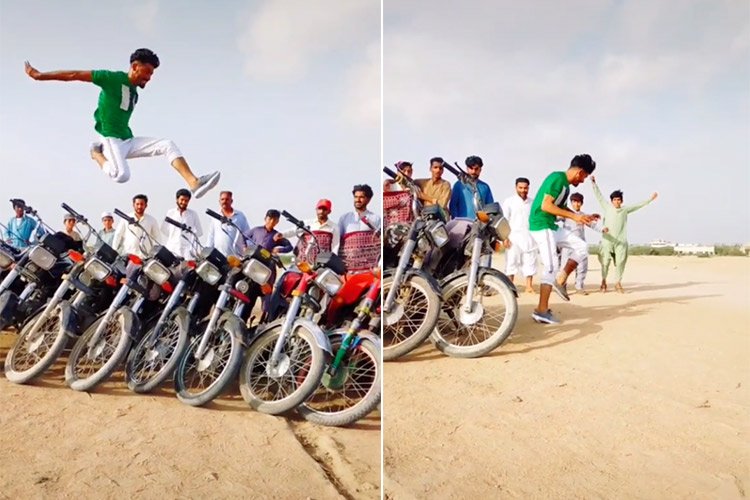 A video of a Pakistani fisherman jumping over 11 motorcycles has gone viral with many celebrities praising him as a potential candidate for long jump contests at the international level.

The viral video shows Asif Machliwala from Thatta area of Sindh province, jumping over 11 motorbikes and landing safely on his feet.


Asif said, “I have been doing this for fun and I believe that I can easily touch the 25-feet mark in the long jump, though I have never measured it.

Asif’s jump over the bikes is believed to be over 23 feet.

Asif has over 1.2 million followers on his TikTok account.

The video made him an overnight sensation with the world sports bodies eyeing a fresh talent.

Renowned singer and actor Ali Zafar tweeted the video with caption: “Beat this!”

Shaniera Akram, wife of legendary cricketer Wasim Akram, tweeted, "Can we see if this guy is any good at cricket too???"

In another tweet, she uploaded a second video where the “athlete” is seen jumping across the river, she wrote, "Wow he’s incredible. It scares me to think how much undiscovered raw talent we are neglecting."