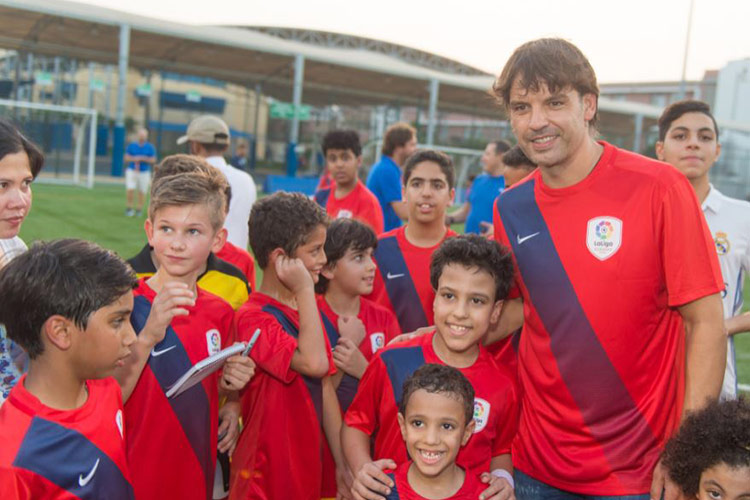 Over the last three seasons, La Liga Academy UAE has changed the face of youth football training in the nation, with over 2,000 male and female players learning to play football the La Liga way.

With the move, La Liga Academy is bringing La Liga’s global brand to Dubai Sports City, along with its superior youth football training programme, executed to the Spanish League’s high standards, and with the same methodology that has developed the world’s best football players.

Moreover, the Football Academy at Dubai Sports City will be upgraded as a result of the La Liga Academy high professional standards, offering young players the same training and development curriculum and methodology used at La Liga clubs and delivered by a team of highly qualified La Liga UEFA-Pro certified coaches.

Maite Ventura, La Liga’s Managing Director for the Middle East and North Africa, commenting on the announcement said: “With the move of La Liga Academy, we are delighted to bring La Liga’s brand and gold standard in training to Dubai Sports City, harnessing the venue’s world-class facilities. This reflects our commitment to advance youth football in the UAE, and we are confident that the Academy’s football programme delivered to the highest standards at the hands of our La Liga coaches, will create a pipeline of professional players right from the Academy.”

Hussein Murad, CEO of Inspiratus Consulting LLC, the sports management agency for La Liga Academy said, “We are delighted to announce Dubai Sports City, which boasts one of the region’s best sports facilities, as the new home of La Liga Academy in Dubai, in line with our mission to offer young players an immersive and professional football academy experience with a La Liga high-level training and development programme.”

He added: “With in a span of just three years, La Liga Academy has established itself as a football academy in a league of its own, powered by La Liga, and we look forward to continue growing in line with the UAE’s goals to elevate the standard of football in the nation.”

Open to boys and girls from 4 to 17 years of all abilities, La Liga Academy, delivers the highest standard of Spanish football training, while providing a pathway to professional football careers and scholarships to top universities.

Registration is now open for the new season kicking off on Aug.30.

In May, four top strikers from the du La Liga High Performance Centre (HPC) were roped in by Al Nasr and Shabab Al Ahli Dubai.

The strikers were selected by the club scouts for their superior talent and skill, honed at the by invitation-only du La Liga High Performance Centre, where they have undergone year-round professional development programmes to world-class standards from La Liga’s Uefa pro-certified coaches.

Since its establishment, du La liga HPC has been producing a steady pipeline of talented footballers for clubs and national teams. With the addition of these four, the total number of players to earn contracts and join professional club and national teams now has gone up to 29.