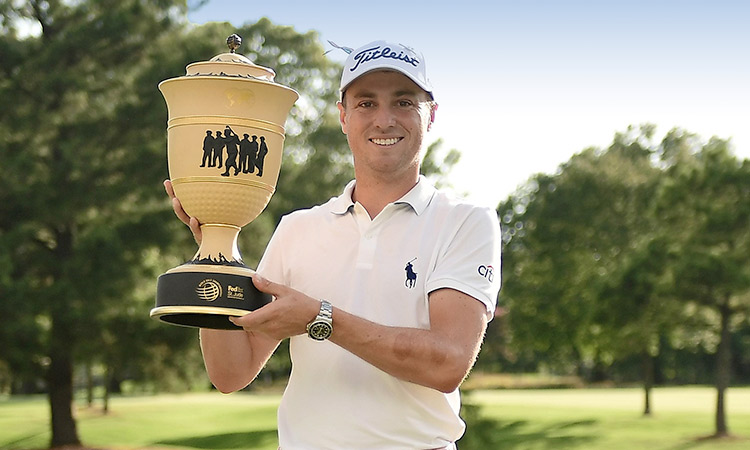 Justin Thomas poses with the trophy after winning the World Golf Championship FedEx St Jude Invitational at the TPC Southwind in Memphis on Sunday. Agence France-Presse

Thomas, who began the day four shots off the lead, fired a five-under par 65 final round to thwart Koepka’s repeat bid and take the title at TPC Southwind in Memphis, Tennessee, on a 72-hole total of 13-under 267.

“It means a lot, especially with how I felt like I did it,” Thomas said. “In the past, I struggled with coming from behind. I got wrapped up in how far I was behind and how many people.”

The 27-year-old American became the third-youngest US PGA Tour player in the past 60 years to reach 13 career wins, behind Tiger Woods and Jack Nicklaus and just ahead of Rory McIlroy.

Koepka, who seeks a third consecutive PGA Championship victory next week in San Francisco, closed with a double bogey after finding water off the 18th tee and slid into sharing second on 270 with US compatriots Daniel Berger and Phil Mickelson and England’s Tom Lewis. Thomas, jumped from third past McIlroy and top-ranked Spaniard Jon Rahm to retake world number one, a spot he held for four weeks in 2018.

‘Unbelievably lucky’:  A back-nine shootout saw Americans Koepka, Thomas, Berger and 54-hole leader Brendon Todd deadlocked with Lewis for the lead on 11-under, while Australian Jason Day, American Chez Reavie and England’s Matthew Fitzpatrick were on 10-under.

Koepka sank a birdie putt from just inside 10 feet at the par-4 13th to seize the lead at 12-under.

Thomas found the left rough at 15 but blasted his approach to six feet and made the birdie putt to match Koepka for the lead. Thomas then sent his tee shot way right at the par-5 16th, but recovered by blasting to the low rough just left of the fairway and dropped his approach three feet from the cup, tapping in a birdie to claim the lead alone at 13-under.

Koepka scrambled on 16 but missed an eight-foot par putt to fall two adrift, only to sink a 40-foot birdie putt at the par-3 17th to move back within a stroke as he walked to the 18th tee.

The unique event uses a Modified Stableford scoring system that awards points for birdies, eagles and all sub-par scores but subtracts points for bogeys and worse with no points for par.

Merritt reached 38 points with a birdie at the eighth but finished with 10 consecutive pars, coming up short on a 30-footer for a 2-point birdie at 18 that would have given him the triumph.

Kang shines: Danielle Kang held off France’s Celine Boutier over the final holes on Sunday to win the LPGA Drive On Championship, the tour’s first tournament since February after a COVID-19 shutdown. It was the fourth career title for the 27-year-old American, whose first win was a major, the 2017 Women’s PGA Championship, and whose other two came at Shanghai in 2018 and 2019.

Kang fired a two-under par 70 to finish 54 holes at Iverness Club in Toledo, Ohio, on 7-under 209, one shot better than Boutier, who missed a four-foot birdie putt on the last hole that would have forced a playoff.

Boutier was alone in second after a closing 71 with Australian Minjee Lee third on 212, Japan’s Yui Kawamoto fourth on 213 and England’s Jodi Ewart Shadoff fifth on 214 after a closing 75. The LPGA managed to play only two events in January in the US and two more in February in Australia before the season was stopped by the global pandemic.

The comeback event, played without spectators on the host course for next year’s Solheim Cup team matches between US and European teams, was played ahead of next week’s LPGA Marathon Classic in nearby Sylvania so players could stay in the same area for both events, easing concerns about contracting the deadly virus.