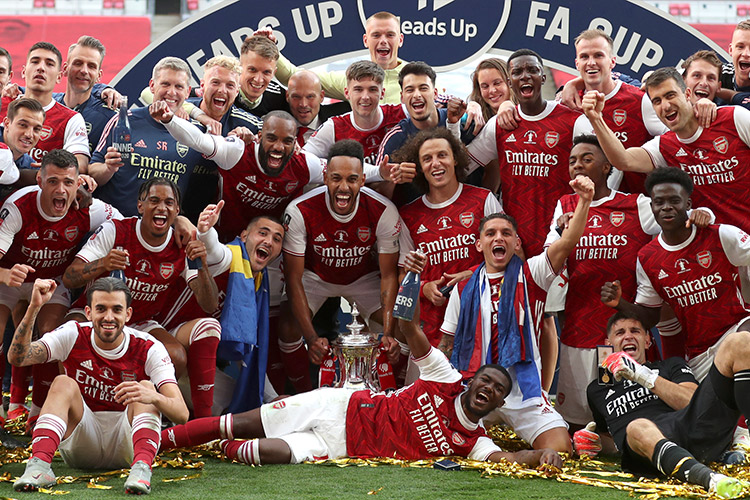 Pierre-Emerick Aubameyang inspired Arsenal to a record 14th FA Cup win as the Gunners captain struck twice to beat Chelsea 2-1 in the final at an empty Wembley on Saturday.

A brilliant finish from Aubameyang 23 minutes from time earned Mikel Arteta silverware in his first season as Arsenal boss before Chelsea were controversially reduced to 10 men when Mateo Kovacic was shown an extremely soft second yellow card.

Arteta said ahead of the final he hoped a taste of success would encourage Aubameyang, who only has a year left on his contract at the Emirates, to commit to a new long-term deal.

The Gabon international's double took his tally for the season to 29 and ensured the Gunners will not miss out on European football next season for the first time since 1995/96 as they qualify for the Europa League.

An FA Cup final unlike any other with nearly 90,000 empty seats saw the traditional singing of "Abide With Me" performed on the Wembley roof.

Chelsea had already achieved their primary goal from Frank Lampard's first season in charge by securing a place in next season's Champions League last weekend and early on they seemed set to cap a top-four finish with Lampard's first trophy as a manager.

Emiliano Martinez flew to his left to turn Mason Mount's shot behind, but Arsenal did not heed that warning as Chelsea's front three combined perfectly for the opener on five minutes.

Mount's low cross was flicked on by former Arsenal striker Olivier Giroud and Pulisic continued his scoring streak since football's return in June by showing quick feet before prodding the ball home.

Ronaldo is the Michael Jordan of football, says United's Lingard

Arteta has gained plenty of plaudits for his tactical nous during his first eight months in a managerial role and the Spaniard managed to reorganise the Gunners during the first-half drinks break to change the momentum of the game.

A minute after play resumed, Nicolas Pepe thought he had curled home a brilliant equaliser from the edge of the box, only to be denied by Ainsley Maitland-Niles being flagged for offside in the build-up.

While Chelsea have already significantly strengthened their forward line for next season with the signings of Timo Werner and Hakim Ziyech, Arsenal are hoping just to hold onto their key man in Aubameyang.

Just like in the semi-final win over Manchester City, he proved to be the match winner as he raced onto Kieran Tierney's hopeful ball over the top and outpaced Azpilicueta before being brought down by the Chelsea captain just inside the area.

Azpilicueta escaped the double punishment of a red card, but VAR confirmed the spot-kick and Aubameyang coolly slotted home.

Chelsea were further hit by two big injury blows either side of half-time as Azpilicueta and Pulisic pulled up with hamstring injuries that will almost certainly rule them out of the Champions League last 16, second leg against Bayern Munich next weekend.

Despite Chelsea's major spending spree in reinforcing their attack, it is at the back where they have been found wanting all season and they were caught out too easily for the winner.

Hector Bellerin burst through the weak challenge of Jorginho before the ball was played into the path of Aubameyang, who skipped past Kurt Zouma and nonchalantly lifted the finish over Willy Caballero.

Worse was to come for Lampard's men when Kovacic was inexplicably sent off for the slightest touch on Granit Xhaka, but Anthony Taylor's decision could not be reviewed by VAR as it was a second bookable offence.

The 139th FA Cup final is the first to be played in front of no fans due to coronavirus pandemic restrictions.

Other American men to play in an FA Cup final include midfielder John Harkes for Sheffield Wednesday in 1993, and goalkeeper Tim Howard for Manchester United in 2004 and Everton in 2009.

The Women's FA Cup has already seen an American scorer in a final, with Carli Lloyd netting in Manchester City's 4-1 win over Birmingham in 2017. 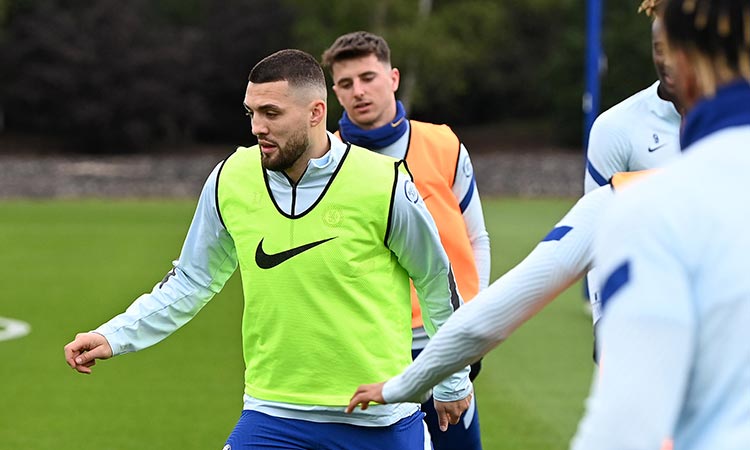