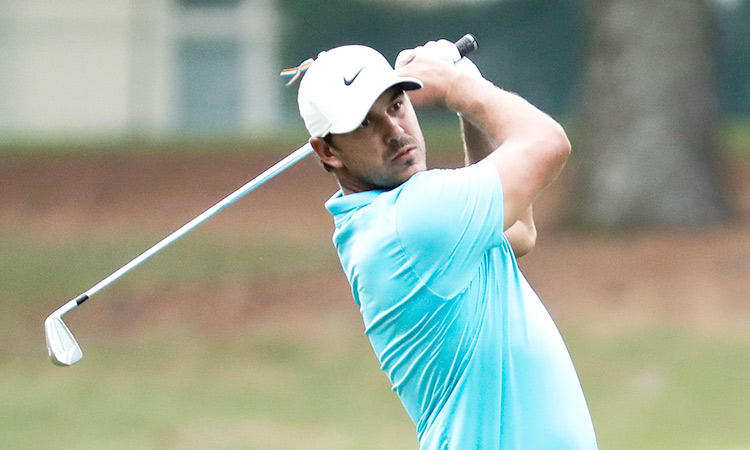 Brooks Koepka hits from the fairway on the 17th hole during the first round of the World Golf Championship-FedEx St Jude Invitational in Memphis on Thursday. Associated Press

Defending champion Brooks Koepka returned to form with a career-tying eight-under-par 62 to grab the lead in the opening round of the WGC-FedEx St Jude Invitational on Thursday.

American Koepka is back on track after a knee injury caused him to miss two of the last three cuts in his most recent tournaments.

He had a hot putter Thursday at the TPC Southwind course, rolling in nine birdies for a two-shot lead over Rickie Fowler and Brendon Todd.

Fowler and Todd both shot a six-under 64 while South Korea’s Kang Sung-hoon is third after a 65.

The 78-player field in Memphis, Tennessee features the top eight players in the world golf rankings and 45 of the top 50.

Koepka will also be defending his title and aiming for a three-peat at next week’s PGA Championship, the first major of 2020.

Koepka missed the cut at last week’s 3M Open which was won by Michael Thompson. It was his third poor performance in a row. He barely made the cut at the Memorial in Dublin, Ohio, then shot 73-80 on the weekend to tie for 62nd place at 12-over 300.

He missed the cut the previous week in the Workday Charity Open, played on the same Muirfield Village course as the Memorial.

The four time major champion has been struggling with a right knee injury since suffering a torn patella tendon last year. He has been using stem cell treatments and has put off having surgery to see if it gets better on its own.

Practice pays off: He said he has been tinkering in practice with the mechanics of his swing and his leg positioning and it seems to have paid off.

“We put in a lot of work and found something by making a little adjustment in my setup -- where my weight distribution was going,” Koepka said.

“It is clicking and it feels good. It feels back to normal. I feel way more in control.”

Koepka got off to a quick start by making birdie on his first four holes, capping that run with a 23-foot bomb on the par-three fourth.

After his only bogey of the round on No. 7, Koepka birdied three of the next four holes, including two from 18 feet on the par-four ninth and the par-three 11th.

He made two more birdies on 13 and 16 then closed his round out with consecutive pars.

Rahm won the Memorial two weeks ago to overtake Rory McIlroy and climb atop the rankings for the first time, becoming the first Spaniard since Seve Ballesteros to hold the top spot.

This was the week scheduled for the men’s Summer Olympic golf tournament in Japan.

Now Koepka is finding his form at just the right time in the season which was shutdown for three months because of the global pandemic.

The Tour is entering its busiest phase with this WGC event, next week’s PGA Championship in San Francisco, three weeks of US PGA FedEx Cup playoff events and the US Open on September 17-20 at Winged Foot near New York.

Two-way tie: Ryan Moore and Adam Schenk both finished with 14 points in bogey-free rounds on Thursday to share the lead after the first round of the Barracuda Championship.

Moore curled in a 20-foot birdie putt on his final hole of the PGA Tour event in Truckee, California which uses a modified Stableford scoring format.

Players receive eight points for albatross, five for eagle, two for birdie, zero for par, minus-one for bogey and minus-three for double bogey or worse.