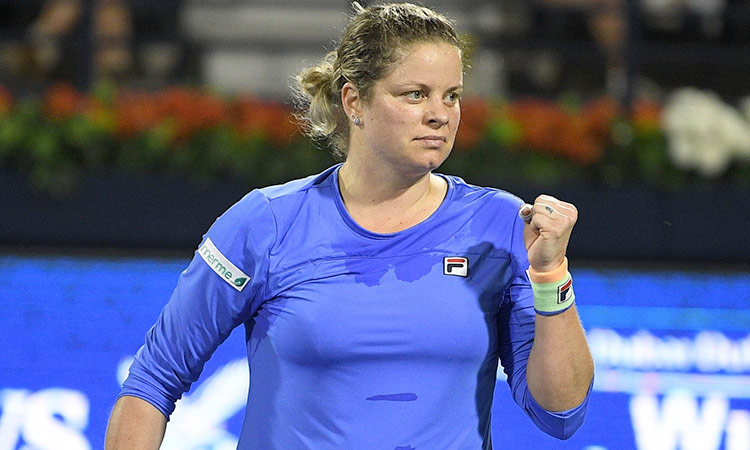 Kim Clijsters is among four major title winners given wildcards for the US Open tuneup event next month in New York. File

The 37-year-old Belgian was joined in the wildcard field for the Western and Southern Open by Japan’s Naomi Osaka and Americans Venus Williams, Sloane Stephens and Caty McNally.

The event, typically staged in Cincinnati two weeks before the US Open, was moved to Flushing Meadows and will be played August 20-28 inside the National Tennis Center bubble without spectators as a result of the coronavirus pandemic.

US Open play will begin there on August 31.

Clijsters, a mother of three, returned to the WTA Tour this year after retiring in 2012. She was ousted in her first match at Dubai in February and in Monterrey in March. She had first retired in 2007 before making a comeback in 2009, when she won the first of back-to-back US Open titles to go with her first in 2005.

Former world number one Clijsters also captured the 2011 Australian Open and in 2017 was inducted into the International Tennis Hall of Fame with 41 singles titles.

Osaka, 22, won the 2018 US Open and 2019 Australian Open. The 10th-ranked star was listed as the highest-paid female athlete in the world by Forbes magazine in May.

Stephens, 27, was a shock winner of the 2017 US Open after an 11-month absence due to a right foot injury that saw her ranking plunge to 957th in the world.

Meanwhile, Britain’s Andy Murray expects some of the top male players to follow women’s world number one Ash Barty in skipping next month’s US Open in New York due to concerns over the coronavirus pandemic.

Australian Barty said on Thursday she was not comfortable travelling to the United States amid the pandemic for the hardcourt Grand Slam, which begins on Aug. 31.

“I have heard some of the top male players aren’t going to play. I would expect that would be the case,” former world number one Murray told British media.

“It’s everyone’s personal decision. If they don’t feel safe, and don’t feel comfortable, travelling and going there and putting themselves and their team at an increased risk, then it’s completely understandable.”

Novak Djokovic, Rafa Nadal and Serena Williams have all entered the Aug. 20-28 Western & Southern Open in New York, which was relocated from Cincinnati this year because of COVID-19 and will serve as a tune-up for the US Open.

Both tournaments will be played without fans in attendance with organisers United States Tennis Association planning to set up a strict bio-security ‘bubble’ to minimize the risk of contracting the novel coronavirus.

“All of the players will have some reservations and it’s whether or not you feel comfortable taking that risk,” Murray said at the Battle Of The Brits Team Tennis event.

“Like I said the other day, my feeling is once we are inside that bubble they created, we will be okay. It’s more the international travel, and getting there which I will be a bit concerned about it.”

Murray has previously said he was still “apprehensive” about travelling to New York but he is mentally preparing for the Grand Slam.