Quartararo on pole as Marquez out of Andalucia MotoGP - GulfToday

Quartararo on pole as Marquez out of Andalucia MotoGP 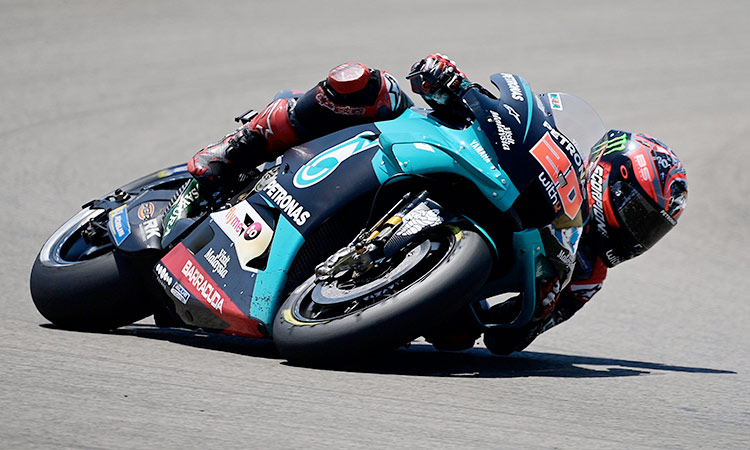 World champion Marc Marquez will not start the Andalucia MotoGP in Jerez after dropping out of qualifying on Saturday four days after an operation on a broken arm.

The six-time Spanish MotoGP champion broke his right arm in a crash at the delayed season-opening Spanish Grand Prix on the same track last Sunday and underwent surgery on Tuesday. He was declared fit to race on Thursday.

The Honda rider sat out practice on Friday and struggled in Saturday’s third session before dropping out of opening qualifying without recording a time. Frenchman Fabio Quartararo, who won his maiden MotoGP race last week, grabbed pole with a lap of 1min 37.007 sec to edge Yamaha’s Maverick Vinales by 0.095sec. It was the second consecutive pole position, and eighth in his MotoGP career, for the young Frenchman who rides for the Yamaha satellite team.

Francesco Bagnaia, an Italian with Pramac Racing, was third fastest, 0.169sec behind Quartararo, to complete the front row of the grid.

Veteran Italian Valentino Rossi was fourth quickest for Yamaha. In the opening practice session of the morning, Spaniard Vinales had broken the track record set by Quartararo the previous week with a time of 1:36.584, but times slowed in the intense heat.

Marquez meanwhile recorded only the 20th best time, 1.3sec behind Yamaha’s Vinales. He was 16th fastest in the second session, 0.99sec behind Takaaki Nakagami, who set the fastest time, but as the session progressed, Marquez began to struggle to hold the line on corners, frequently slowing and swinging wide.

Unusually, he rode back into the pit lane a few minutes before the end of the session.

Because he had failed to record one of the top 10 times, Marquez did not have a bye for the first qualifying session. He started but returned to the pits without posting a time, climbed off his bike and walked out of the garage.

A bad qualifying session for the Marquez family ended with younger brother Alex heading for a medical examination after crashing his bike on turn five. Honda quickly tweeted that “Alex is back in the box and has avoided any series injuries. Rider OK.”

Alex Marquez did record a time, but it was the slowest of the qualifiers and left him 21st and last on the grid.