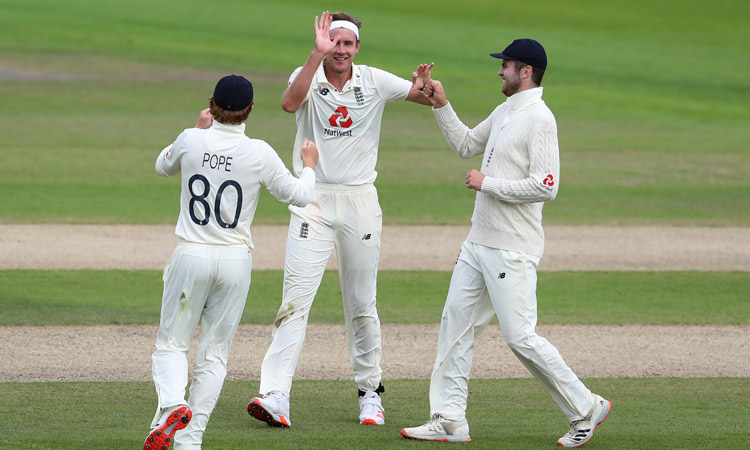 Stuart Broad (C) celebrates with teammates the dismissal of Roston Chase during the second day of the third Test match at Old Trafford on Saturday. AP

England had slumped to 280-8 after losing four wickets for 18 runs before No.10 Broad's swashbuckling 62 took them to a first innings total of 369.

He then took a wicket with his fourth ball to have West Indies dangerman Kraigg Brathwaite caught at slip by England captain Joe Root and at tea the tourists were 59-3.

John Campbell, dropped on 10 when normally reliable second slip Ben Stokes put down a routine chance, was starting to look good while making 32. 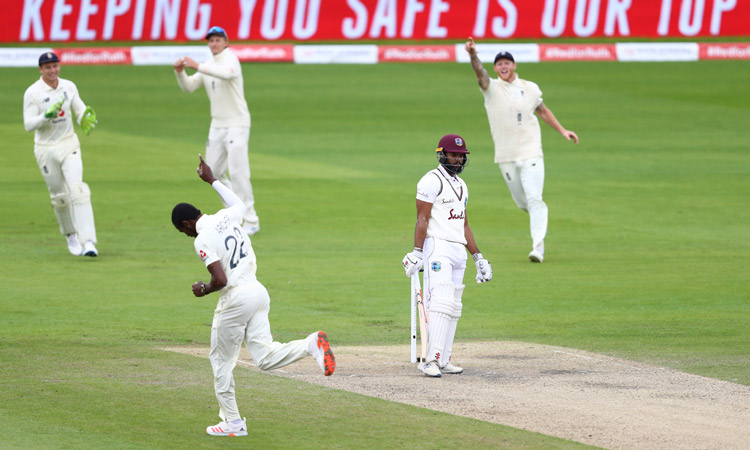 But fast bowler Archer, back after being omitted from England's series-levelling win in the second Test for breaching the bio-secure regulations governing this series, produced a rib-high delivery that left-hander Campbell could only fend to Rory Burns in the gully.

And there was time before tea for James Anderson to strike on his Lancashire home ground when a superb delivery from England's all-time leading Test wicket-taker had Shai Hope caught behind.

At the interval, the West Indies trailed by a deficit of 310 runs, in a three-match series all square at 1-1.

But Pope failed to add to his score as England struggled against new ball duo Kemar Roach and Shannon Gabriel.

Pope had already been dropped by Rahkeem Cornwall in the slips when Gabriel, the unfortunate bowler on that occasion, knocked his stumps to end a fifth-wicket stand of 140.

Pope's 150-ball innings, included 11 fours, with the 22-year-old Surrey batsman still waiting for a second century in 10 career Tests following his 135 not out against South Africa at Port Elizabeth in January.

Chris Woakes promptly played on to give Roach, who finished with 4-72, his 200th Test wicket. 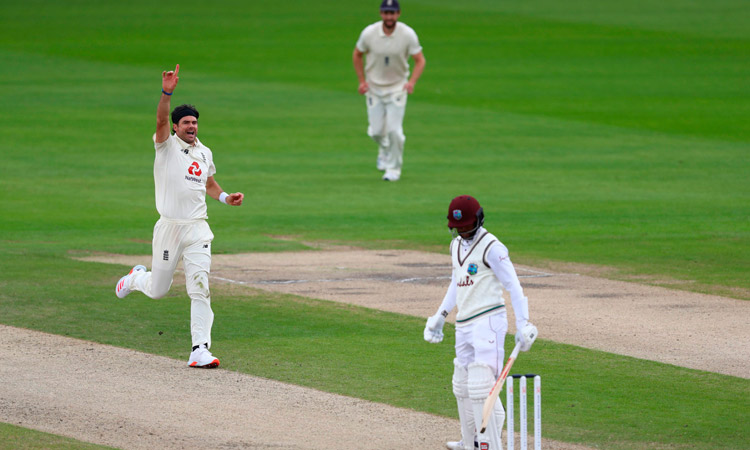 Buttler was well caught low down for 67 at second slip by West Indies captain Jason Holder who in the next over took another good catch to dismiss Archer.

But left-handed batsman Broad, whose Test-best score of 169 against Pakistan at Lord's in 2010 is higher than any managed by his father Chris, the former England opener, counter-attacked.

Broad, on a ground where he was hit on the face by a bouncer from India's Varun Aaron six years ago, pulled Roach for six and cut Holder for four as the new ball started to soften.

Broad completed a 33-ball fifty with his eighth four, a pull off Holder, who sent England into bat, before hitting a full-toss from occasional off-spinner Roston Chase to deep midwicket after dominating a ninth-wicket stand of 76 with Dom Bess.