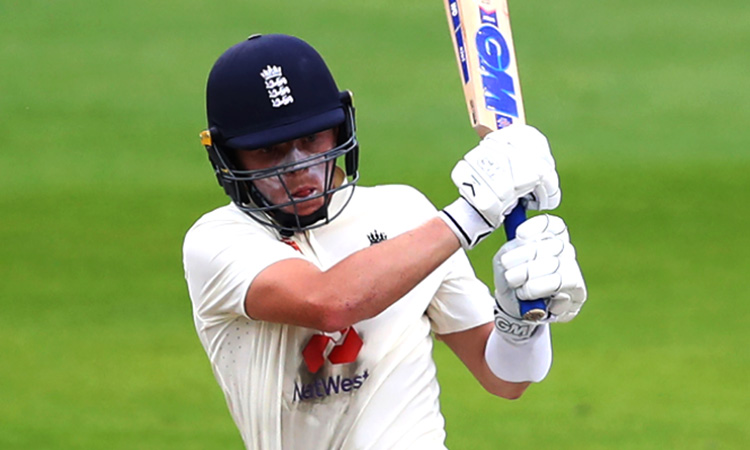 England’s Ollie Pope bats during the first day of the third Test match against West Indies at Old Trafford in Manchester on Friday. Associated Press

England were in trouble at 122-4, with second Test century-makers Dom Sibley and Ben Stokes, as well as captain Joe Root, all out cheaply.

But Pope, who ended the day in sight of his second hundred in 10 career Tests, and the under-pressure Jos Buttler, 56 not out, shared an unbroken stand of 136.

England had moved on to 258-4 when bad light forced an early close after West Indies captain Jason Holder had won the toss under grey skies.

England dropped number three batsman Zak Crawley and left-arm paceman Sam Curran following their 113-run win in the second Test, also at the Manchester ground, that squared this three-match series at 1-1, with their places taken by Jofra Archer and veteran spearhead James Anderson.

Root, promoted to number three in Crawley’s absence, was in early after opener Sibley, who had frustrated the West Indies with a near eight-hour hundred in the second Test, fell for a five-ball duck when plumb lbw to fast bowler Kemar Roach.

Root then gifted his wicket when, after Rory Burns cut recalled off-spinner Rahkeem Cornwall, the England captain went for a tight single but was run out for 17 by Roston Chase’s direct hit from backward point.

That brought in Stokes, playing after a quad injury cast doubt over his bowling fitness.

But with Stokes’ innings of 176 and 78 not out pivotal to England’s win in the second Test, it was no surprise to see him effectively deployed as a specialist batsman. Stokes, now the world’s top-ranked Test all-rounder and behind only Australia’s Steve Smith and India captain Virat Kohli in the batting standings, was, however, brilliantly set-up by Roach.

The paceman tested him out with a couple of short balls and, having previously moved a couple of deliveries away from the left-handed batsman, clean bowled Stokes with one that seamed back to leave England 92-3.

Burns made a composed fifty before Cornwall, belying his 6ft 6in and some 22 stone frame, held an outstanding one-handed slip catch following a fiercely-edged cut off Chase.

But the 22-year-old Pope continued to bat in a mature fashion, although he had a lucky break on 30 when a miscued pull off Shannon Gabriel evaded a diving Chase, running back from mid-on.

Pope, however, showed plenty of class en route to a 77-ball fifty. World Cup winning wicket-keeper Buttler, whose Test future was under a cloud following a run of 13 innings without a fifty, upped the tempo by hoisting Cornwall for two sixes in four balls.

Pope went into the 90s by elegantly on-driving a Roach delivery with the new ball for four in the manner of former England batsman Ian Bell.

Archer had been left out of the second Test for breaching the regulations designed to prevent coronavirus infections after making an unauthorised trip home. This series, played without spectators, marks international cricket’s return from the COVID-19 lockdown.

Scoreboard at stumps on the first day of the third Test between England and the West Indies on Friday: